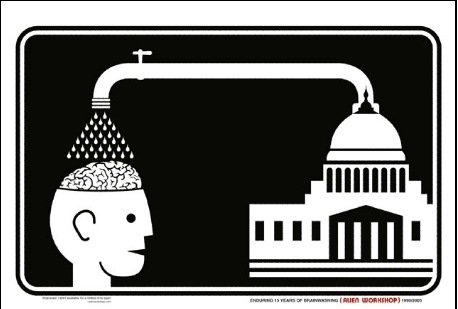 In this video, we look at the ideas of Edward Bernays, nephew of Sigmund Freud, and a pioneering mind behind the field of public relations and modern propaganda – particularly his ideas on how group psychology, and the illusion of choice, can be used to manipulate the masses.

This is all about dividing and conquering. While we argue about which political puppet is less evil than the other, they wreak havoc on us and destroy everything in their path for power, fame, and wealth.

If you want to make the best change, reject the system, the entire system, and refuse to vote. The task of any control system, therefore, is to maintain the facade of political choice and central to this is “the people’s right to vote,” writes Ben O’Hanlon for Medium.

The easiest way to divide people is through political theater. This is going to be a tough red pill for people to swallow…

It literally doesn’t matter who you vote for. If your vote actually mattered, it would have already been made illegal.

“Let us control the money of a nation, and we care not who makes its laws.” – A “maxim” of the House of Rothschilds.

This isn’t an astonishing or groundbreaking statement. On some visceral level, we all understand this. So why then, is it so easy to divide people into political groups so a small handful of other people can rule over them? Basically, propaganda – the illusion of choice keeps people stuck believing they are free to decide when it really doesn’t matter much anyway. You don’t get to vote for the people behind the scenes that make all the decisions anyway, only the puppet whose face will be attached to those decisions.

Voting provides a corrupt system with legitimacy, regardless of who you vote for. It implies that you consent to the outcome because you participated even if you wanted the other guy to win. The use of dividing people into political parties is not new, but the desire to break free from them and the ruling class. in general, is.

There is something being concocted in the dens of power, far beyond the public eye, and it doesn’t bode well for the future of this country.

Anytime you have an entire nation so mesmerized by political theater and public spectacle that they are oblivious to all else, you’d better beware. –John W. Whitehead

Voting is nothing more than an illusion of choice. It’s akin to slave putting a piece of paper in a box that asks the master to be free. It doesn’t work that way. Figure out the difference between right and wrong, and one of the first things that happen is a refusal to vote for the lesser of two evils…which is still evil, by the way. Because any master who thinks they own anyone else is evil and all politicians think they own you to some degree. 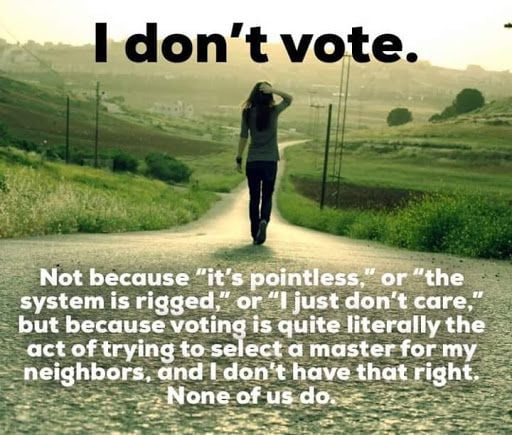 Besides, how do you know who won? The mainstream media tells you, right? And they are so honest, just, and trustworthy, and would NEVER do what they are told…oh, wait. Yeah, it’s that insane.

Trump bent immediately to the will of the deep state. Like a twig in the wind.

It’s time to be honest about that. The people never had a champion in the ring.

Let us talk no more of “democracy,” or of “voting”. Of course, that is hard to accept and acknowledge, because it is so devastating to the delusions that hold individuals together from day to day.

Many people may not even be capable of holding the thought or notion that they might oppose or stop it. Most Americans are now literally numb to the actions of its own government, the lives it is destroying and the lies it is working for.

The candidates and the creatures of the state who have willingly lied and deceived the people while looking them in the eye (and pretending to have good reasons) are recklessly and wantonly jeopardizing the world in a way that that hasn’t been seen since the cold war. –SHTFPlan, April 13, 2017

“None are more hopelessly enslaved than those who falsely believe they are free.” – Johann Wolfgang von Goethe

If you are being honest with yourself, you would surely know by now that you don’t require a ruler, a master, or an authoritarian to make decisions for you. It’s time we begin to own ourselves and reject the power-hungry politicians will to rule over us all. People seem to be getting increasingly angry at those who are trying to wake them up and free them from the mental chains they’ve put on themselves. I see this as a sign that the system’s propaganda has worked, but only on those easy to control from the start.