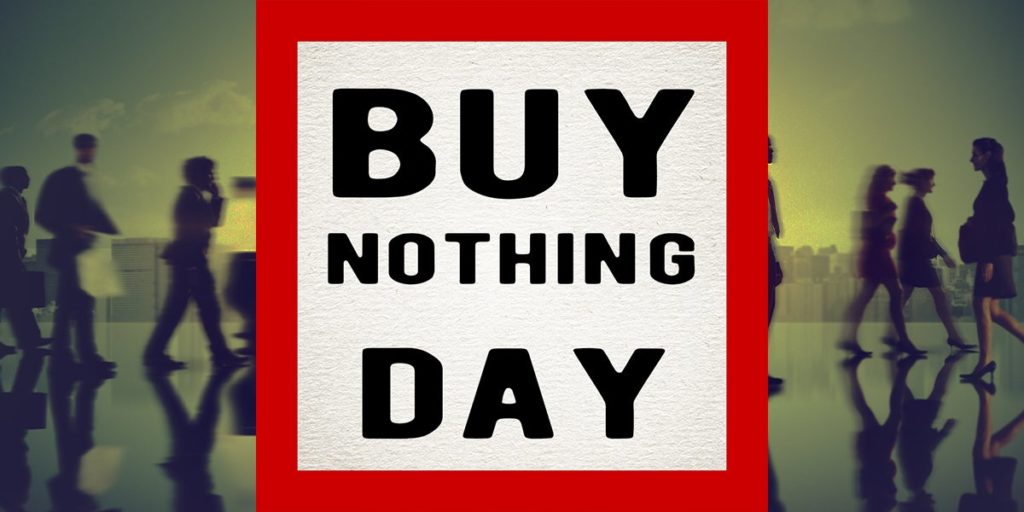 Each year in the United States, millions of people participate in a mass ritual in consumerism that has come to be known as Black Friday. Less than 24 hours after people claim to contemplate on what they are thankful for, many of them engage in battle with their neighbors over discounted plastic or electronic goods. As the years go on, the scenes at Black Friday sales have become increasingly chaotic and violent, with deaths and injuries becoming commonplace.

Many people decide to stay home and shop online instead, while others have decided to boycott the sales altogether. The most popular Black Friday boycott is known as “Buy Nothing Day,” and it has been going strong for 24 years now. The boycott was initially organized by Vancouver-based artist Ted Dave, who wanted to promote a “day for society to examine the issue of over-consumption.”

The first official boycott kicked off on the same day as Black Friday in 1997, and has spread all over the world in the decades since.

The website of the UK chapter for Buy Nothing Day states that:

The rules are simple, for 24 hours you will detox from buying stuff – anyone can take part provided they spend a day without spending! Instead of shopping, people around the world will take part in a 24-hour moratorium on consuming, either as a personal experiment or public statement. The anarchy that ensues on Black Friday has now become an absurd dystopian phenomenon … Black Friday sucks the life out of small businesses, who cannot compete against this ruthless price cutting. If you really need to shop on Buy Nothing Day, ignore the big retailers … make commitment to support local independent shops and businesses.”

Advocates of Buy Nothing Day say that they hope to encourage mindfulness about consumption habits that will last for years to come.

According to the National Retail Federation, more than 174 million Americans shopped from Thanksgiving through Cyber Monday in 2016. The average amount that each shopper spent that year was around $335. This year, experts predict that 165 million people plan on shopping for Black Friday this year.