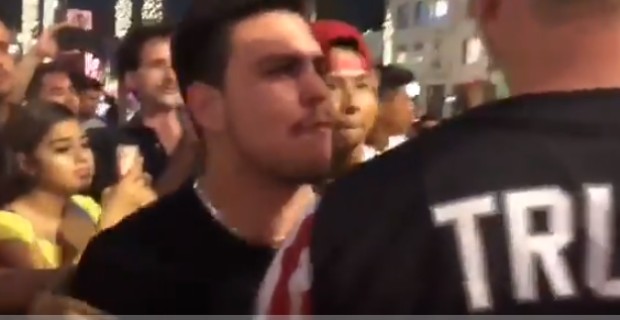 Video footage shows a Marine veteran and a man wearing a Trump shirt being violently attacked by leftists near the Trump Hollywood Walk of Fame star.

The video shows a man getting in the face of Elijah Schaffer, who is wearing a Trump shirt. The angry man, who appears to be hispanic, repeats the phrase, “I can say nigger if I want to” twice before attempting to escalate the situation.

Schaffer tells the man, “get out of my face” before a scuffle breaks out between another Asian man and an individual who is referred to as a Marine veteran.

[INSANE VIDEO]: Fight breaks out at Donald Trump’s star on Hollywood Boulevard. All because @ElijahSchaffer was wearing a Trump jersey and USA hat.

Be safe out there. The intolerance is real! pic.twitter.com/eGk6pYKiti

Other anti-Trump agitators join in the fight before one of them launches a kick at a man filming the scenes on a large camera.

A group of teenagers then break out in a chant of “fuck Donald Trump” as Schaffer and the veteran, who ably defended themselves against the mob, leave the area.

Singer Joy Villa said herself, Schaffer and the Marine veteran were “surrounded by (a) violent mob” and pointed the finger at Democratic Rep. Maxine Waters for inciting the violence.

Me + @SlightlyOffens surrounded by violent mob as we wore MAGA hats & spread love at @realDonaldTrump Star. Our Marine Veteran was attacked. They stole Elijah’s $3000 camera. THIS is what @repmaxinewaters call to violence brought here in LA @foxbusiness @foxandfriends @tomilahren pic.twitter.com/LGkUeHpj5d

“So now wearing a Trump jersey with @Joy_Villa is enough to get your crew beaten up in Los Angeles. Jk. We stood our ground. They stole our $3000 camera,” tweeted Schaffer.

So now wearing a Trump jersey with @Joy_Villa is enough to get your crew beaten up in Los Angeles. Jk. We stood our ground. They stole our $3000 camera. PayPal info@photosbyelijah.com or Venmo @elijah-Schaffer PLEASE. Need to replace it to film. pic.twitter.com/dZYUmHE8Xu

This is just the latest in a series of violent assaults on Trump supporters. Breitbart has compiled a list of over 500 such attacks since before the election.

Trump’s Hollywood Walk of Fame was destroyed by a man wielding a pickax earlier this week.

“I think I did, like, a real good act,” said Clay. “Personally, I don’t feel resentful. I feel proud of myself.”

Let's check in on the walk of fame stars that don't cause outrage… pic.twitter.com/QG5eSXTrVT