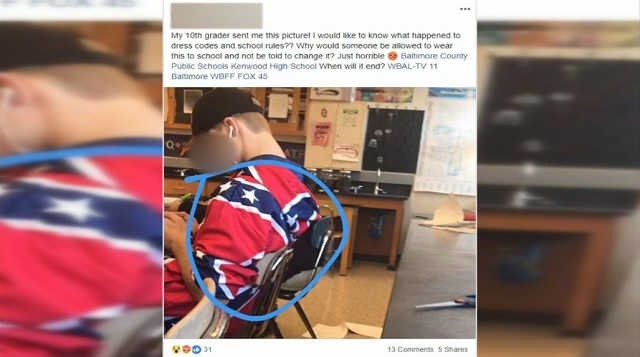 The media is more focused on whether the shirt was appropriate rather than the violent mob beating.

From The Daily Wire:

On Friday, numerous Kenwood High School students in Baltimore, Maryland physically attacked a fellow classmate for wearing a shirt with a Confederate flag on it, students say. A video of the apparent brawl, wherein multiple students are seen assaulting a classmate as a teacher unsuccessfully tries to break up the mayhem, has since made the rounds on social media.

School officials confirmed to WBFF Fox 45 that “there was a fight of some sort” in the classroom, though they declined to comment further.

The correct term would be a violent mob beating. A “fight” implies there were two parties taking part. The student was first sucker-punched and then jumped 4 or 5 versus 1.

According to witnesses in the school, the male student was brutally attacked while sitting in a ninth grade classroom solely for wearing the shirt.

“The people were just randomly seeing the guy and hearing about him wearing a shirt like that, and when they saw him, they decided to be rash about it,” said Kenwood student Alex Wilkinson.

Wilkinson was in an adjacent classroom from where the fight initially broke out; it eventually poured into the hallway.

“I definitely saw just a bunch of people just screaming at him from really up close,” he added.

“He was minding his business, honestly,” said Tra’shaw Holmes, another student. “They had no right touching him.”

The same crowd which says you shouldn’t blame women who dress provocatively for getting raped of course is blaming this student for getting jumped.

The attackers should be charged with a hate crime.