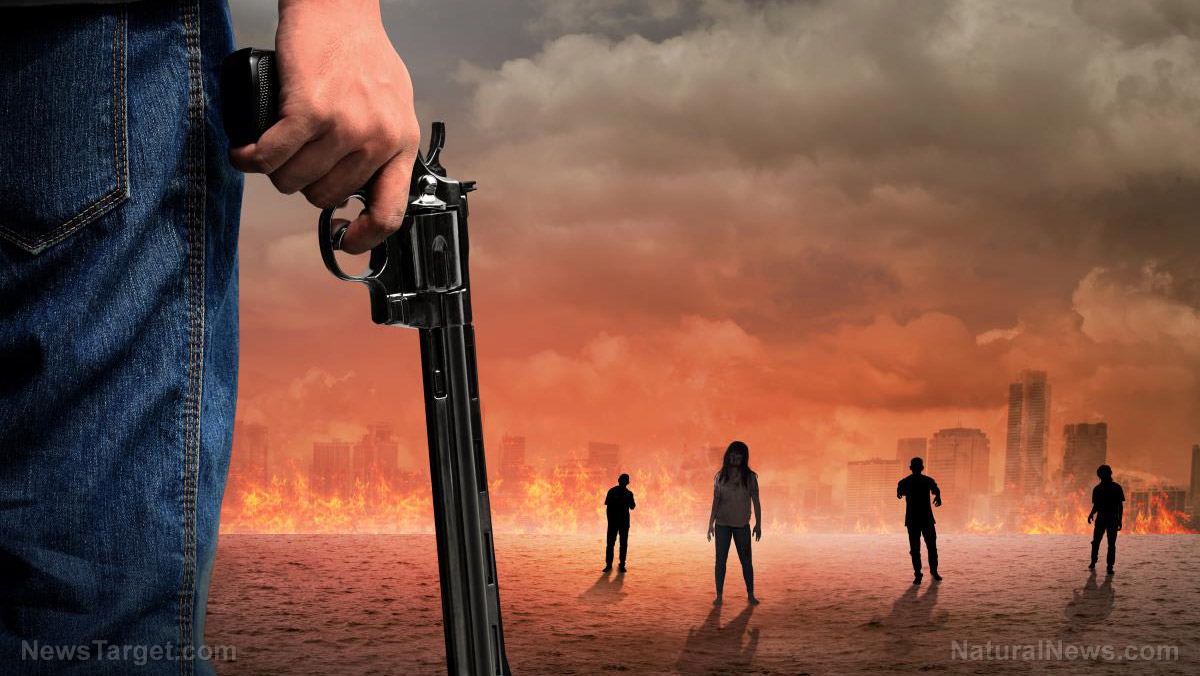 (Natural News) One major difference between Democrats and Republicans is that most Democrats’ thoughts are clouded by mainstream media hype and the highly subjective, emotionally-charged, “current event” and scripted “official narrative” news, while most Republicans keep the big picture in mind, knowing fake news is always a cover for a long-term, more insidious agenda.

If you’ve noticed lately, the Left has shifted to an extremely radicalized FAR left, into a deep-seeded rage of hostility, fear, frustration, and a much more obvious cult-like mentality.

The ultimate goal of this “chess match” has been uncovered and revealed by truth media. For the far Left, the end justifies the means, and the ultimate “end” goal is mass population reduction by any means possible (just like with Hitler). It’s the underlying, concurrent theme of everything they’re preaching right now, and it’s blatantly obvious, except to the “sheeple” on the Left who are blindly following the “herd” right off the cliff.

Let’s take an inside look at the controlled chaos, so we don’t slip down the deadliest slippery slope America has ever witnessed. Here we go.

Why do Americans who are pro-vaccine zealots also support mass uncontrolled illegal immigration?

At first look, it simply doesn’t make sense that people who are absolutely paranoid about catching infectious diseases, and who have their children (and themselves) injected with every known carcinogen the CDC “recommends” are screaming at the same time for open borders that will enable the mass migration of people from third world countries who bring with them the very diseases these vaccine zealots are immunized against.

But look deeper and you find the answer.

It’s all about population control. You see, the leaders of the new Democrat-Socialist-Communist regime have all their sheeple brainwashed, and yes, even the intelligent, hard-working ones. The “social justice” theme has them completely turned upside down, getting injected with dozens of vaccines that cause disease, spread disease, maim children, and lead to cancer and dementia, all while voting for mass illegal immigration of more people who will vote for more of the same. Get it?

Forced vaccination across our nation is on the horizon, and it will come right after mass gun confiscation, so nobody can defend their health rights. The far Left needs tens of millions of people who are dumbed down to vote for their own demise, and so far, it’s working. One herd (the illegal immigrants) is infecting the other herd (the pro-vaccine zealots) with all the diseases that scare them to death (pardon the pun), including AIDS/HIV, hepatitis B and C, tuberculosis, measles, whooping cough, and malaria.

Vaccine herd theory has always been a hoax, and that’s why it is completely debunked and obliterated when the illegal immigrant HERD enters the USA with all those infectious diseases the American sheeple just vaccinated themselves against.

The sheeple Democrats simply can’t fathom that their leaders are installing the mechanisms of population control right under their noses, and getting them all to vote for it. And what’s the formula for creating brainwashed sheeple? That’s easy: It’s a combination serum of scripted mass media, fluoridated water, vaccines, flu shots, GMOs, canola oil, and prescription medications. To them, all fake news is real, and all real news is fake. Again, it’s all about mass population reduction, and it’s coming like a tsunami.

Absolute irony? Same pro-vaccine zealots who say they care about “the children” just legalized infanticide in New York, and then CHEERED it

At first look, it doesn’t make sense that there’s no capital punishment for murderers in New York, but you can now legally murder your baby as it’s coming out of the mother on the day of birth. Upon first consideration, it also doesn’t seem to make sense that the citizens of New York are “all in” for protecting their infants and children from supposedly dying of infectious diseases by vaccinating them with 50 jabs before age 7, but those same people vote to legalize infanticide (the mass killing of babies in the womb up until their actual birth).

But look deeper and you find the answer.

A deeper look reveals the real rationale for all of that. Population control. The insane, psychopathic Democrat leaders in New York don’t support capital punishment for murderers while supporting mass vaccination and baby-in-womb murdering because all of that is population reduction. It doesn’t matter to the genocidal eugenicists whether people are killed illegally by serial murderers or legally by radicalized parents. Get it?

And now it all makes sense: No prisons, no borders, no police, no guns, no babies, no free press, no free speech, no natural medicine, no organic food, no electoral college, no gender differences, no patriotism, no God. It’s not about social justice. It’s not about free college, or free income, or free food, or free health care.

It’s not about “global warming” either – that’s just a huge Ponzi scheme. It’s all about population control through toxic food and chemical medicine, and it always has been, and now the far Left is leading the Blitzkrieg. Face it, there’s nothing “free” when you’re a slave. Wake up and smell that toxic corporate coffee.

Always be aware of the big picture folks. Stay organic and stay smart. Tune into FakeScience.news for more updates on how the Far Left, Big Pharma, and the Biotech goons intend to brainwash more Americans into voting for their own demise.