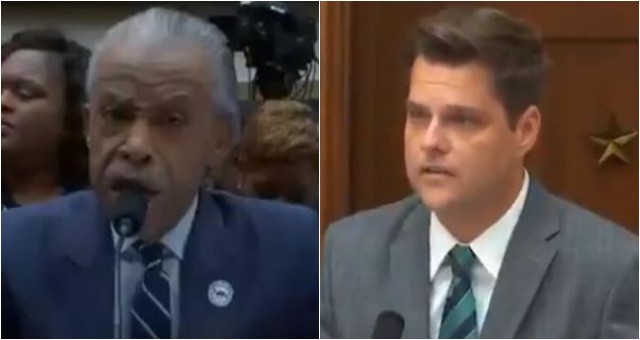 (NationalSentinel) Rep. Matt Gaetz has never been one to back down from Democrats when it comes to defending the Constitution, American values, and the rule of law.

In fact, there are few more effect warriors against Left-wing extremism in Congress than the Florida Republican.

And he demonstrated those qualities once again on Thursday during a bullshit hearing on “police brutality” staged by majority Democrats.

To add further insult to the process, Democrats actually brought in the country’s biggest race-baiter (and tax evader) Al Sharpton.

The former reputed FBI informant is the last person Americans need to hear from when it comes to matters of race and ‘civil rights.’

He has a long history of stoking racial division for personal gain. He’s a shit disturber, in other words, and Gaetz knows this fraud well.

So well, in fact, that Gaetz used his time during the hearing to read Sharpton’s many past racist statements to him, which often left the “reverend” scumbag speechless or stumbling for words.

It was classic Gaetz, and it was glorious. (H/T Gaetz’s office)

Gaetz: "Have you ever referred to African Americans that disagreed with you as ‘cocktail-sip negroes’?”

Reverend Al Sharpton: "I have." pic.twitter.com/oSUNri8XC7

Gaetz Reads Al Sharpton’s Racist Statements Back to Him

Gaetz exposed Sharpton’s history of racist remarks and inflammatory actions by quoting a resolution by former Congressman Joe Scarborough, which detailed a pattern of questionable conduct by Sharpton.