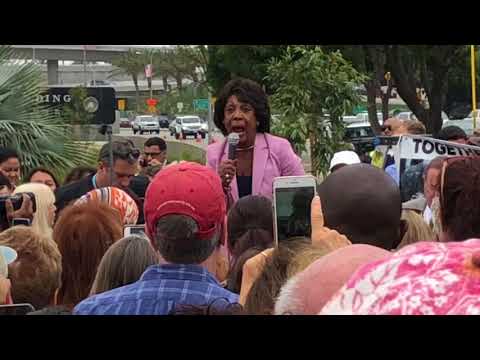 A woman that, in her old age, is barely able to string coherent words together has called in The Big Gun.

President Trump must be shaking in his boots.

Speaking before a boisterous mob on Saturday, Waters encouraged the further harassment of Trump Administration officials in public places.

Rep. Maxine Waters (D-Calif.) on Saturday called on her supporters at a rally to confront Trump Cabinet officials in public spaces like restaurants and department stores to protest the administration’s policies.

“I have no sympathy for these people that are in this administration who know it is wrong what they’re doing on so many fronts but they tend to not want to confront this president,” Waters said at a Los Angeles rally on Saturday.

Waters’s call comes as the Trump administration faces major backlash over the handling of its “zero tolerance” immigration policy, which has resulted in the separation of immigrant families.

Demonstrators in a separate incident outside Nielsen’s home on Friday blasted audio of crying migrant children who had been separated from their parents.

The American Mirror highlights Waters’ delusion. She now claims that God is on her side in her ongoing battle with President Trump:

“History will record while he tried to step on all of us, we kicked him in his rear and step on him,” she yelled, whipping up the crowd.

“If you think we’re rallying now, you ain’t seen nothin’ yet,” she warned.

“And guess what,” she predicted, “we’re going to win this battle because while you try and quote the Bible, Jeff Sessions and others, you really don’t know the Bible.

Waters, a nation of Islam sympathiser, may not even know who God is.

Waters has an unhealthy obsession with ‘taking Trump out’.

This is a woman who has offered no reason to impeach President Trump but has continually promised that she would find something.

That was not a fair comment. Though she hasn’t offered reasons that seem to be enough for Trump supporters, Waters does believe that Trump should be impeached for letting Russia invade Korea.

Provide proof of the Russian invasion of Korea Congresswoman Waters, please. Please be sure to show how President Trump was complicit in that invasion. We will listen to your impeachment arguments at that point.

Until then, please keep your divisive comments out of the public square. That stuff may work with your mobs of delusional California Mad Max worshippers, but your act doesn’t play well with intelligent Americans.