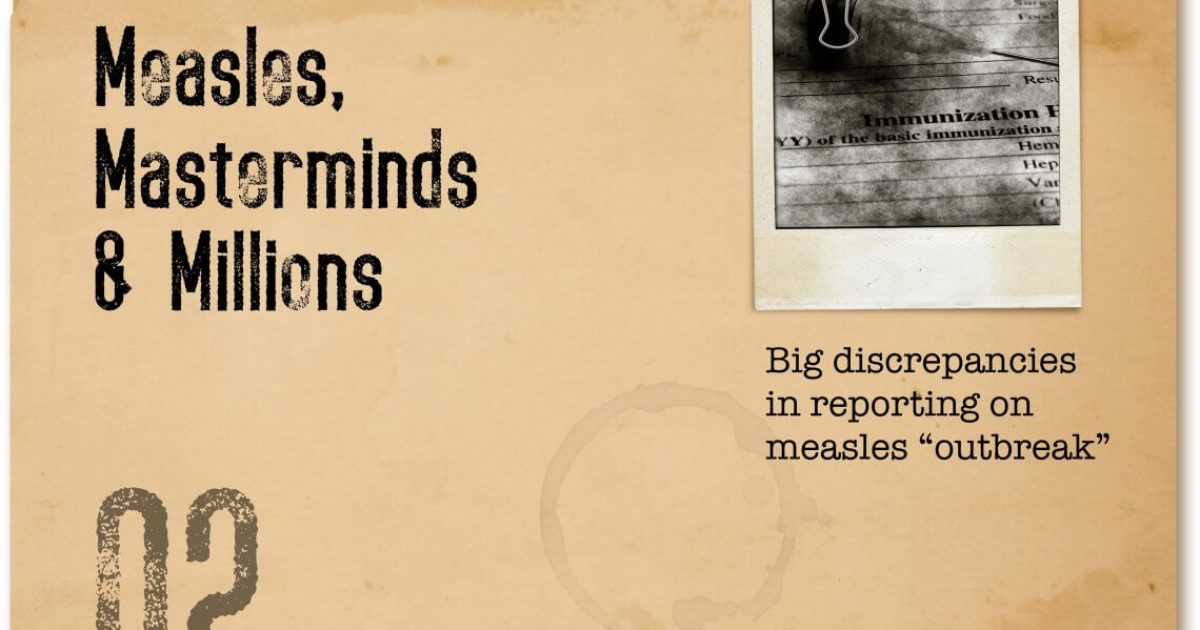 The media, HHS, WHO, and CDC are all up in arms over why people are concerned about vaccinating, and going so far as to proclaim “the measles outbreak is the anti-vaxxers fault, they are conspiracy theorists spreading misinformation, and this is dangerous!” The problem is, they only wish to portray selected statistics while being very deceptive and exaggerating the danger – which has played a major role in huge public distrust.

• For the past 26 years, since 1993, there have been 5,788 cases of measles reported in the U.S., and 4 measles-related deaths, two of which had other complications and was only determined after death

Trending: Who Is Maxine Waters, Really?

• 483 Claims of injury or death from the MMR vaccine have been paid by the U.S. Government since 1988

Part I covered how the Clintons masterminded the mandatory free Vaccines for Children program back in 1994. This was important information to lay the groundwork for how the program and vaccine industry works, as well as the government having complete oversight. More information on the government’s involvement will be presented in subsequent reports. This is a 6-part investigative report, and it is highly recommended to read Part I prior to moving on to Part 2, below.

The Deputy Mayor for Health and Human Services recently stated “this anti-vaccine movement has proven to be very dangerous,” while mainstream news backs her up with claims that there are myths, lies, conspiracy theories, and widely debunked information circulating social media. Whereas there may very well be some misinformation circulating, most “anti-vaxxers” are not 100% anti-vaccine. In fact, they have spent a great deal of hours sifting through documentation from the CDC and Health and Human Services so as to extract the critical data that doesn’t seem to make the news. They are simply trying to share the information that is not being shared with the public.

These same people have been fighting for investigations, legitimate scientific research be done and exposed, whistleblowers be heard, and transparency of the ingredients as well as the $4.1 billion in settled claims – all come to light. They just want the truth. The more the truth is suppressed, while sickness, autism, paralyzation, and infertility prosper, the more people want answers. And the fact is, when you shut whistleblowers down, publish discrepancies in numbers, redact FOIA requests, settle claims in secrecy – all while lobbying both sides of government, who control the entire vaccine industry – it’s going to raise some eyebrows. And that right there is the issue. Not that these folks are 100% anti-vaxx, as most people probably recognize that some vaccines have likely helped to eradicate diseases, but just how many vaccines are necessary, what exactly is in them, and why are health issues and infertility at staggering rates?

BIG Discrepancies & Misrepresentations in Reporting on The Measles “Outbreak”

The CDC publishes case updates on their website. As of April 26, 2019, they claim that 704 individual cases of measles have been confirmed in 22 states, indicating this was an increase of 78 from the week prior when they were reporting it to be at 626. They state that this is the greatest number of cases reported since 1994, which is an interesting year if you are following along. They also note that case count is preliminary and subject to change and that the data is updated every Monday. 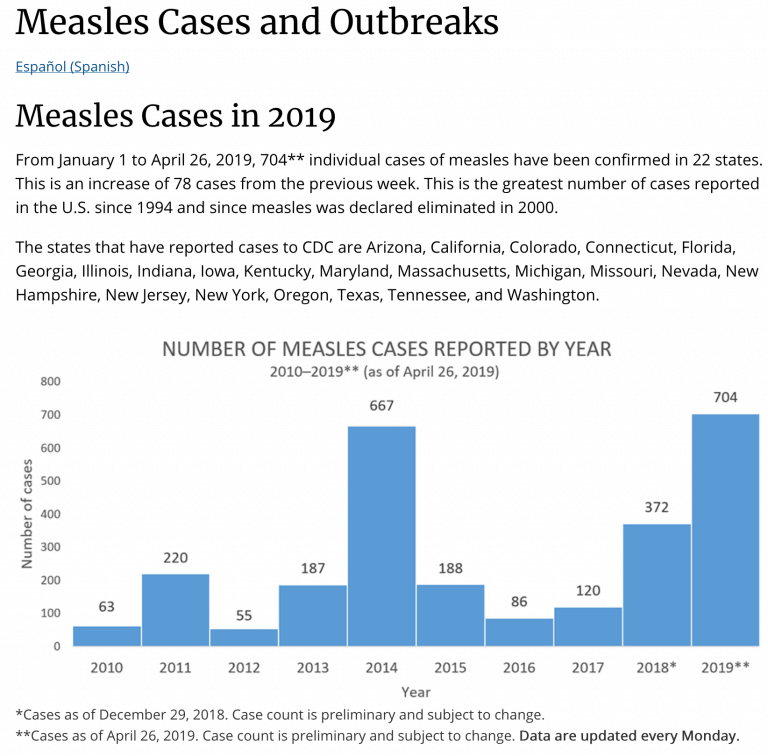 Between 1993 and 1999 there was one measles-related death. In 2003, a 13-year old girl died three months after having a bone marrow transplant. According to the CDC, she tested positive for measles during a brain biopsy, after death. According to the CDC, a 75-year-old international traveler was infected in Israel and died from the measles in 2003 as well. In 2015, a woman passed away from pneumonia with no sign of the measles, and was later reported to have had measles after an autopsy was done. Note that three of the four are NOT babies, and the fourth does not indicate the age.

One key statistic neither the CDC, the WHO, or mainstream media include in their reports, is the fact that there have been 483 measles vaccine injury and death claims paid by the U.S. Government since 1988.

Keeping all of the above in mind, the CDC also maintains weekly charts by state and region, indicating the number of reports coming in from each location via the NNDSS. They also receive numbers directly from the state health departments, which is then added to the weekly chart. They state the health department numbers are subject to ongoing revision of information and it may reflect changes to the counts in later weeks. All of this information is gathered to determine the final counts in the chart above. That said, it would seem their ongoing weekly case reports are lagging very far behind. As of this week, from January 1 to April 26, 2019 (same time span as chart above), they only indicate 271 indigenous and 237 imported, totaling 508. That is a very significant difference.