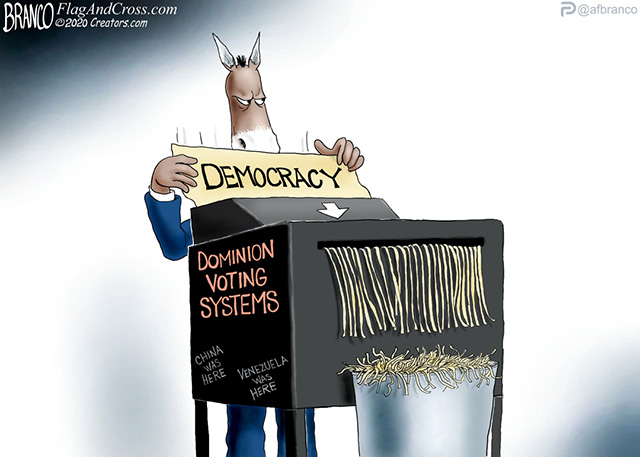 (Natural News) One of the biggest false claims about Donald Trump is not that he was a dupe of Vladimir Putin or that he and the Kremlin “colluded” to ‘steal’ the 2016 election from two-time presidential loser, Hillary Clinton, although those are pretty serious.

No, the biggest lie told about Trump by Democrats and the never-Trump political crowd…is that he lies.

Everything Donald Trump has said was done to him by the double-crossing deep state has been true:

— Barack Obama did authorize his Trump Tower to be ‘wiretapped’ — a slang term meaning ‘electronic surveillance’;

— He did not ‘collude’ with Russia in any way, shape, or form;

— He was joking when he said during a campaign speech that Russia probably had Hillary’s ‘missing’ emails;

— He never threatened to withhold military aid from Ukraine until Kyiv agreed to investigate Joe and Hunter Biden.

But here’s something else: Trump was branded as a ‘liar’ and a ‘conspiracy theorist’ when he argued that voting machines during the 2020 election were very likely manipulated, based on eyewitness reports that they were.

Now, it turns out that he was right about that, too.

And none other than CNN is reporting it:

Federal cybersecurity officials have verified there are software vulnerabilities in certain ballot-marking devices made by Dominion Voting Systems, discovered during a controversial Georgia court case, which could in theory allow a malicious actor to tamper with the devices, according to a draft analysis reviewed by CNN.

The vulnerabilities have never been exploited in an election and doing so would require physical access to voting equipment or other extraordinary criteria standard election security practices prevent, according to the analysis from the US Cybersecurity and Infrastructure Security Agency.

But because the subject is Dominion voting equipment, which has been the target of conspiracy theorists who falsely claim there was large-scale fraud in the 2020 election, federal and state and local officials are bracing for election deniers to try to weaponize news of the vulnerabilities ahead of midterm elections.

You see what state-aligned CNN is doing here, nonetheless: While reporting that the machines have been found to be vulnerable to hacking, the fake news network went on to throw cold water on the 2020 election in a weak attempt to claim that there was no hacking in Joe Biden’s victory. What a load of manure; the machines are either vulnerable or they aren’t, and they apparently are, which means, by default, they could have been (and, according to eyewitnesses, were) hacked and manipulated to cheat Trump out of his reelection.

And another thing: There was wide-scale vote fraud in the last election, as the meticulously documented film “2,000 Mules” points out; the never-Trumpers and Democrat/left-wing media liars have screamed for 18 months, ‘Where’s the proof??” — and yet, when the proof is laid out clearly using official data and video sources, the left still claims there is ‘no proof’ that Trump’s election was stolen. That’s how this game works; it doesn’t matter if Joe Biden shot someone on a D.C. street in broad daylight with all the major networks filming at the time, they would find some way to claim it wasn’t him.

But there’s another reason why CNN is reporting on this now: We have more elections on the horizon and the Democrats are going to take a shellacking thanks to the pitiful, pathetic job Biden is doing. Look for major Republican victories to be blamed on ‘hacked voting machines’ that ‘they’ warned us about ‘months ago.’

The left is pushing to destroy trust in our electoral system so they can convince enough Americans to allow them to replace it with one that will keep them in power forever.