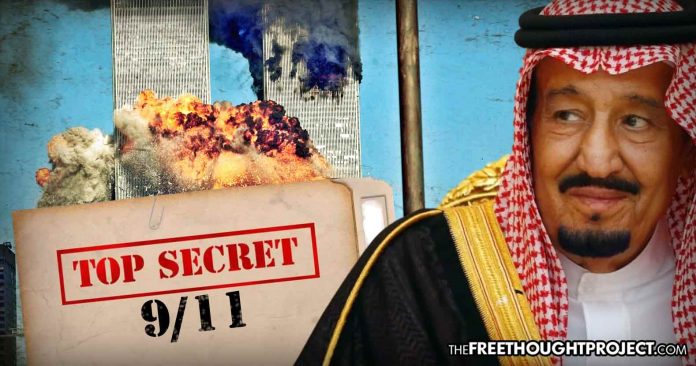 As dramatic scenes of Brett Kavanaugh protests and support dominated the airwaves, the United States Senate met to vote on S. Res. 610 – A resolution urging the release of information regarding the September 11, 2001, terrorist attacks upon the United States. Remarkably, the passing of this resolution on 9/11 information has received zero mainstream media coverage.

September 11 was the largest act of murder ever carried out on American soil which has been shrouded in conspiracy and secrecy since it happened 17 years ago. One would think that the declassification of tens of thousands of pages in regard to who may have financed and carried it out would be important news. However, according to the mainstream media, Kavanaugh is a far better sell.

In 2016, the US government released the 28 pages that showed Americans the United States not only knew of the alleged role Saudi Arabia had in 9/11 but also chose to cover that information up for over a decade. While this was certainly a massive leap forward in finding out the real story of 9/11, much of the documents were heavily redacted and there is apparently a lot more out there.

Now, with the passage of S. Res. 610, the victims, their families, and millions of Americans may soon have a better understanding of what exactly transpired that day and why we attacked Afghanistan considering a total of 15 of the 19 alleged 9/11 perpetrators were citizens of Saudi Arabia.

Urging the release of information regarding the September 11, 2001, terrorist attacks upon the United States.

Whereas tens of thousands of pages of documents relating to the September 11, 2001, terrorist attacks upon the United States remain classified by the Federal Government;

Whereas the Federal Government may properly classify and control access to information in order to protect sources and methods of collecting critical information in defense of the country and the people of the United States;

Whereas the contents of these documents are necessary for a full public understanding of the events and circumstances surrounding the September 11, 2001, terrorist attacks;

Whereas the decision to maintain the classified status of many of these documents prevents the people of the United States from having access to information about the September 11, 2001, terrorist attacks, including the involvement of certain foreign governments in the attacks; and

Whereas the people of the United States and the families of the victims of the September 11, 2001, terrorist attacks deserve full and public disclosure of the events surrounding the attacks: Now, therefore, be it

Resolved, That it is the sense of the Senate that—

(1) documents related to the events of September 11, 2001, should be declassified to the greatest extent possible; and

(2) the survivors, the families of the victims, and the people of the United States deserve answers about the events and circumstances surrounding the September 11, 2001, terrorist attacks upon the United States.

According to Senator Richard Blumenthal (D-CT), who sponsored the legislation, the release of this information will show the links between the country all presidents in recent history have bowed down toand the worst terrorist attack in US history.

“At a time of very deep divide in our country, and in this body, all of us are still able to come together to help the survivors and families of the horrific September 11th terrorist attacks, as they seek justice, and fairness to deter additional and ongoing state sponsorship of terrorism,” Blumenthal said.

“The legal and moral responsibility of our government is, in fact, to provide its citizens with all available information regarding this horrific tragedy on 9-11-2001, particularly where there may be evidence that foreign nationals conspired within our borders to support terror with the assistance of foreign governments.”