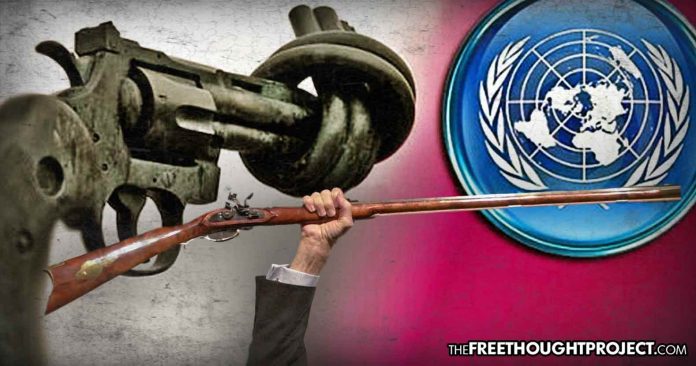 While the United States is typically set apart from other countries when it comes to gun laws, a recent conference with the United Nations has raised major red flags, as the U.S. agreed to enact “full implementation” of an international agreement on gun control that will violate Americans’ constitutional rights by adding their personal information to a global database.

The Third Review Conference (RevCon) of the United Nations’ Program of Action (PoA) on Small Arms and Light Weapons was held in New York last week with a 2018 agreement, which states that its purpose is to serve as “a renewed commitment to prevent, combat and eradicate the illicit trade in small arms and light weapons in all its aspects.”

The agreement states that it will act as an “international instrument to enable states to identify and trace, in a timely and reliable manner,” light arms and small weapons, while “bearing in mind the different situations, capacities, and priorities of States and regions.” All the while, it will be tracking “progress made in the implementation of the International Tracing Instrument; noted the challenges to the implementation of the Instrument, whether continuing, recent or emerging.”

The conflict and post-conflict situations addressed by the agreement include the need for “disarmament, demobilization and reintegration programs and community violence reduction programs,” along with international instruments, such as, “regular inventories, surplus disposal, including through destruction, and the implementation of appropriate measures when losses are detected.”

The agreement also listed management and security measures that would include “marking, record-keeping and, as appropriate, tracing by law enforcement authorities, for illicit small arms and light weapons that are found, seized, or recovered in conflict and post-conflict situations.”

In order to implement the agreement on a national level, the Program of Action lists a series of requirements for each government to follow:

Americans who are reading the agreement may be thinking that in order to fully implement it in the United States, it would require a full repeal of the Second Amendment—but this Program of Action appears to be the overreaching plan that has already been proposed, in part, in individual laws introduced on national and local levels in the U.S.

Media coverage and calls for stricter gun control on the local level are having a real effect as multiple cities pass bans on “assault rifles.” Residents in Deerfield, Illinois, were forced to turn in all guns that qualify as assault weapons last month, or face fines of $1,000 a day if they did not comply.

The city council in Boulder, Colorado, has followed suit by unanimously passing a ban on the sale and possession of assault weapons, high-capacity magazines and bump stocks, giving residents until July 15 to comply. Massachusetts and New Jersey have also passed statewide bans on bump stocks, and police were shocked to find that only a few people complied by turning in the newly illegal accessories.

On the national level, when gun control legislation was introduced in Congress last year, it came in the form of the Fix NICS Act, which was later rebranded as the STOP School Violence Act and signed into law in March after it was quietly included in the 2018 Omnibus Appropriations bill. The legislation amends the agencies that have control over the National Instant Criminal Background Check System, which determines whether Americans are allowed to own guns.

As The Free Thought Project has reported, the changes to the NICS system—which received support from Democrats, Republicans, and even the NRA—put pressure on federal agencies and states to report as many names as possible, “making it only a matter of time before this list becomes so large that nearly any activity could serve to remove your Second Amendment rights.”

The NICS database will now continue to grow in the U.S. with government agencies receiving incentives for their contributions, and the United States’ involvement with the United Nations gives it the perfect setup to turn over all of its information on American citizens in the NICS database, in order to fully cooperate with the UN’s Program of Action.

As always, when rights are stripped away and civil liberties are ignored, it is done in the name of “safety and security,” even though, as history has shown, the opposite is true.