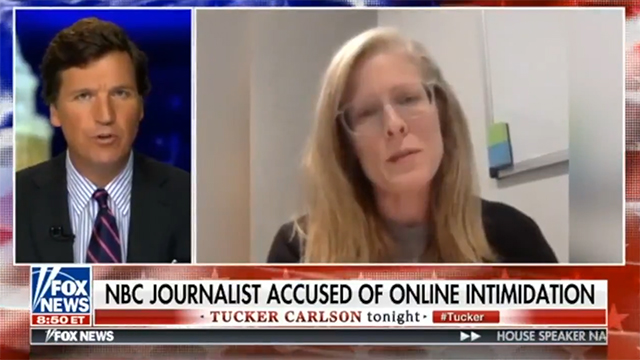 The Blue Cheka journos who work to dox dissidents and get them censored on behalf of our corrupt ruling class threw a fit Thursday on Twitter after one of their own, NBC smear-merchant Brandy Zadrozny, was exposed on Tucker Carlson Tonight.

Here’s the piece I’ll be discussing. These disinformation reporters hate to be named themselves… https://t.co/7HmeWMfWGQ

Darren: "She will do everything she can to unearth anonymous Trump supporters, basically so she can ruin their lives." pic.twitter.com/tSxwMNL3E9

.@DarrenJBeattie On How The MSM Uses The Term "Disinformation" To Silence & Destroy The Lives Of Trump Supporters

Darren adds that some of these doxxing efforts against Trump supporters are even funded by TAXPAYER dollars. pic.twitter.com/pPnGPW0Uvp

Folks came out of the woodwork to tell their stories about Zadrozny ruining their lives:

She doxed a black Trump supporter because we were online friends. Even after he told her that he lived in a very rough area with his grandmother and would get death threats. This was her intent – to get him killed. https://t.co/zHxScpITdT

This is the same bitch that wrote a hit piece on me ending my 12 year successful photography business and making my life a living hell. https://t.co/ZGexHD80Op

NBC News, CNN’s resident pro-censorship activist and doxer Oliver Darcy and many others threw a fit in response.

NBC News, showing they have no standards whatsoever, said she “represents the best of investigative journalism and of NBC News.”

“Fox News has chosen to smear Brandy,” they said. “In so doing they have shamefully encouraged harassment and worse.”

If that’s the case, what has Brandy’s “journalism” encouraged?

Disgraced disinformation agent Brandy Zadrozny is not a journalist…she is a neo-Stasi commissar who is paid by NBC to ruin the lives of anonymous trump supporters online.

NBC is furious I exposed her on Tucker Carlson’s show…. https://t.co/Yc2ubpumh0

Ben is furious that I exposed his fellow Stasi-agent Brandy Zadrozny.

Remember folks, when the media doxes you, gets you censored on social media and runs cover for antifa carrying out terrorism against you it’s “the best of investigative journalism” but when you simply report on what they’re doing you’re “harassing” them and potentially putting their lives in danger!