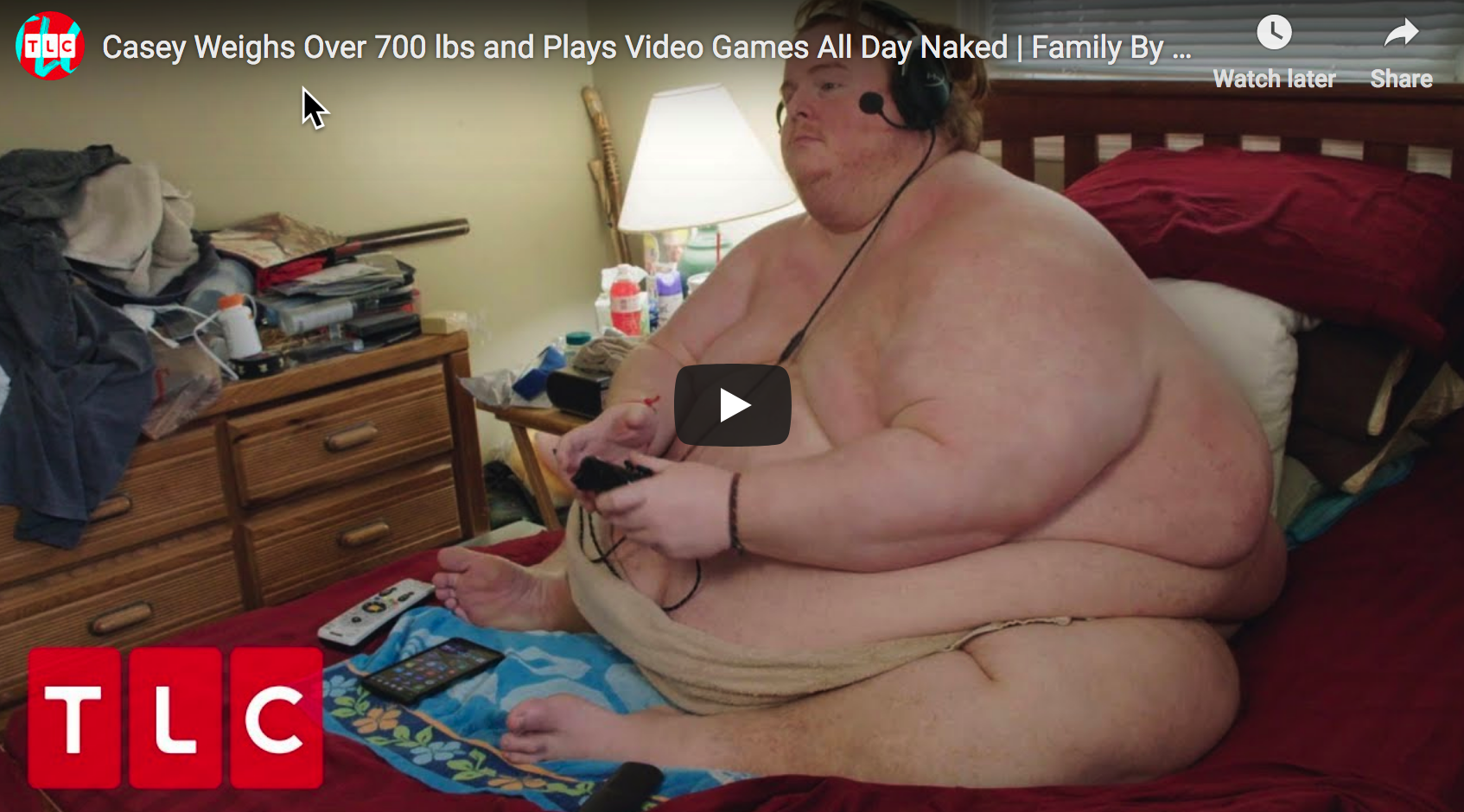 34-year-old Casey King is so obese that he can’t work, he has to bathe outside in a trough like a pig, and he has to rely on his father to constantly take care of him. He now weighs more than 700 pounds, but he just keeps on eating massive amounts of unhealthy food. Just like America as a whole, he has absolutely no self-discipline and absolutely no desire to turn his life around. On some level he understands that he is literally killing himself with his destructive behavior, but he does not have a desire to change. Instead, he told TLC that he “will just eat until I am dead”…

Featuring in a TLC TV series called Family by the Ton, Casey said: “I will just eat until I am dead, probably.

“I wake up around 12, figure out something I’m going to eat immediately [then it’s] TV, video games, bed — it’s not a lot of activity.”

Because of the hot weather in Georgia he prefers to skip clothes, wearing only a headset through which he uses to chat to other gamers playing online.

It is easy to criticize Casey for his lack of activity, but he is really not too different from most other Americans.

As I have written about before, the average American spends approximately five hours a day watching television. We are willingly plugging ourselves into “the propaganda matrix” for thousands upon thousands of hours, and of course that is going to greatly affect our outlook on life and how we see the world.

But of course most Americans don’t watch television and play video games while naked. But for Casey, clothes have become too restricting and so he just sits on his bed naked all day long…

‘It’s hot in Georgia, and all my clothing is restricting and tight, so I just sit there naked, free as can be and no one bothers me — door’s shut, we’re good,’ he explained.

The gaming community has become a safe space for him because it allows him to escape his everyday life.

‘I’m accepted in all those virtual reality worlds and the gaming world I’m in,’ he said. ‘No one sees me. That is my outside. That is my world that I can be the Casey I want to be, but not be judged on my weight.’

The only reason why Casey is able to live this kind of lifestyle is because his father takes care of him and pays all the bills.

And on a much grander scale, isn’t this what our country is turning into? Young adults are flocking to socialist ideas because they want the nanny state to take care of them from the cradle to the grave and give them everything for free.

At 34 years of age, Casey should be in the prime of his life, but instead he is utterly dependent on his father as he waits around to die. He needs a reason to live, and right now he doesn’t have one. In the end, this is not how he anticipated his life would turn out…

‘I never would’ve thought at 34 I’d be living with my father, and I’d have no job, have no real money, and just be playing video games all day and eating,’ he said.

It would be really easy to look down on Casey, but the truth is that our nation is just like him in so many ways.

At this point, we are a nation that completely lacks self-discipline. Obesity is at an all-time high in the United States, millions of us are addicted to legal and illegal drugs, we have one of the highest rates of alcoholism on the planet, 37 percent of all Americans have eaten fast food within the last 24 hours, and the CDC says that 110 million Americans currently have a sexually-transmitted disease.

But when I first learned about Casey, I didn’t think about any of those things.

Instead, I thought about our exploding mountain of debt. Like Casey, we just can’t stop ourselves from going back for more. We have been on the greatest debt binge in the history of the world, but our hunger just keeps growing.

In just a matter of days, the U.S. national debt will hit the 22 trillion dollar mark, but nobody in Washington seems to care. But if you were to sit down and talk with most of our politicians, they would ultimately admit that all of this debt is an existential threat to our nation. It is just that they completely lack the willpower to do anything about it.

We know that what we are doing is definitely going to kill us, but we are not willing to change.

Meanwhile, state and local government debt levels are at record highs, public and private pensions are unfunded by trillions upon trillions of dollars, corporate debt has doubled since the last financial crisis, auto loan debt is at an all-time high, credit card debt is absolutely soaring, and student loan debt has roughly tripled over the last decade.

So please don’t be too critical of Casey, because the truth is that he would make a perfect poster boy for what we have become as a nation.

When people point to a modestly good short-term economic number as some sort of “victory”, I just laugh, because the truth is that all of those numbers are fueled by record amounts of debt.

During 2018, we added close to 1.4 trillion dollars to our national debt. If all of that money was pulled out of the economy and we had only been spending what we had been bringing in, we would be in the worst depression in American history right now.

The only way we can maintain our economic facade is by endlessly gorging ourselves on debt, but in the process we are literally destroying the bright future that our children and our grandchildren were supposed to have.

In the final analysis, what we are doing to ourselves as a nation makes Casey King look like a sharp, disciplined, athletic young man in comparison.

If we keep doing this to ourselves, we have no future, and nobody can argue with that.