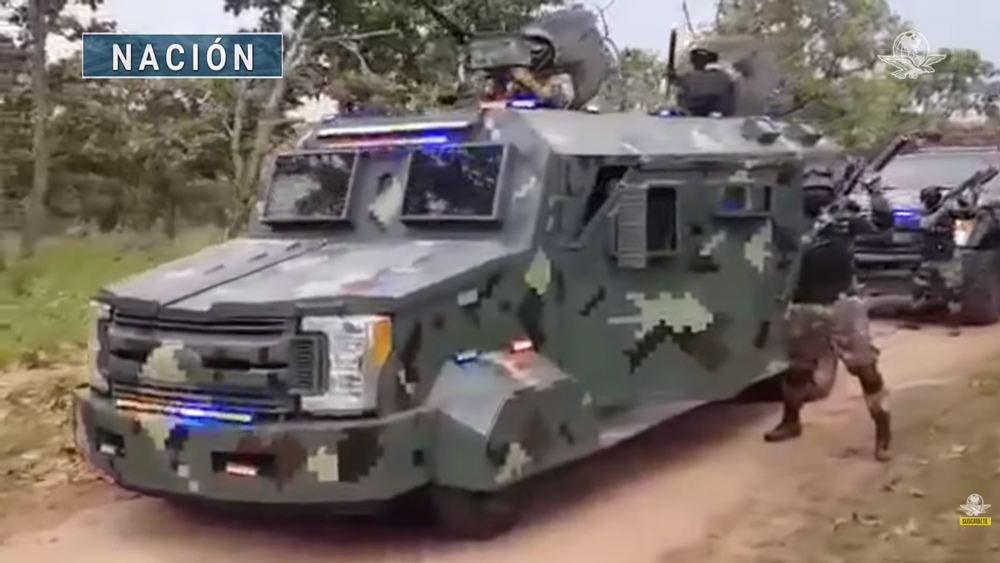 (Natural News) A shocking video making the rounds in Mexican traditional and social media appears to show a column of very well-armed cartel ‘troops’ driving what appears to be up-armored vehicles.

According to the newspaper, however, ranking government officials are downplaying the very impressive display of firepower (according to Google Translate):

Given this, the Secretary of Security and Citizen Protection of the Government of Mexico, Alfonso Durazo, expressed via Twitter that the material is being analyzed, although he anticipates that it is an ‘evident assembly.’

“The propaganda video attributed to a criminal gang is being analyzed in order to confirm its eventual authenticity and temporality,” he wrote on Twitter, according to the translation.

“Regardless of this, we state that there is no criminal group with the capacity to successfully challenge the federal security forces, much less from that evident assembly,” he added.

The report adds that the date and time of the video, as well as the location of the convoy — which appears to be driving mostly American-made trucks and SUVs — inside Mexico. (Related: FBI probing armed far-Left Antifa plot to disrupt U.S.-Mexico border in attempt to spark anti-government rebellion.)

One of El Universal’s reporters, Gabriel Guerra, commented that the video “is truly worrying.” Though the authenticity of the group and its true identity remains a mystery at present, he wrote on Twitter, according to a translation, that “it speaks of an armed capacity comparable to or greater than that of many guerrilla groups.”

“Everyone will read different things, what I see is an enemy of the Mexican State and of all of us,” Guerra added.

Security experts that the paper spoke to also downplayed the column, noting that it consists of around 25 vehicles with roughly 100 accompanying men, which is fairly common for cartel forces.

“Remember that there has been a record of convoys of up to 60 vehicles and groups of 100 or 150 hitmen. And some places where these phenomena have been replicated, such as in Villa Union, in Coahuila,” said Alejandro Hope, according to a translation.

Hope also said that some of the heavier weapons, such as Barrett .50 caliber turret guns, have also been seen in the possession of the cartels.

That may be, but in the video, some of the weapons in the turrets appear to be belt-fed, indicating automatic fire and that they are military-grade.

Nevertheless, Hope called for caution and to not let the video be successfully utilized propaganda.

“Who knows where the convoy was moved from, perhaps it was only for propaganda purposes,” he said.

“It is not the largest criminal group we have seen. The Zetas were more intimidating,” he added, in reference to a separate cartel.

Without question though, the cartels have proven to be more than a handful for the Mexican military in the past. In fact, when Andres Manuel Lopez Obrador took office as Mexico’s president in December 2018, he promised to end the use of the military against the cartels because doing so over the previous decade had proven to be fruitless.

If Mexican cartel firepower wasn’t so heavy or so sophisticated, it seems like the Mexican military would have been able to handle them. But that wasn’t the case.

In any event, the Trump administration is taking the threat seriously.

In April, the president announced “enhanced counter-narcotics operations” throughout the Western Hemisphere that included the use of additional military assets.

Defense Secretary Mark Esper noted that Trump directed “enhanced counter-narcotics operations in the eastern pacific ocean and the Caribbean Sea” as “part of the administration’s all-of-government approach to combatting the flow of illicit drugs into the United States and protecting the American people from their scourge.”