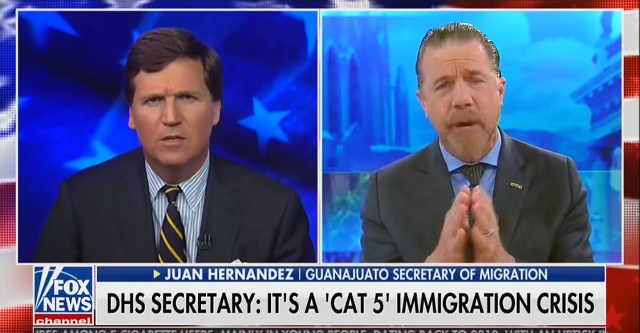 This is good comedy.

Things got awkward fast when Tucker Carlson asked a Mexican official why Central Americans migrating through Mexico shouldn’t be allowed to remain there.

Speaking with Guanajuato Secretary of Migration Juan Hernandez on Wednesday night’s edition of “Tucker Carlson Tonight,” the Fox News host began by asking why Hernandez’s own words from the past wouldn’t constitute a “hostile act” against the United States.

“I want to read three quotes from a Mexican government official, and these are direct quotes,” Carlson said. “‘We are betting Mexican-Americans will think ‘Mexico first,’ even unto the seventh generation. Mexican immigrants to the United States are going to keep one foot in Mexico. They are not going to assimilate in the sense of not being Mexican,’ and final quote, ‘We recognize the Mexican population is 100 million in Mexico and 23 million who live in the United States. We are a united nation.’”

“Those quotes are from you,” Carlson told Hernandez. “And I wonder if a government takes that position, that it’s sending foreign nationals to your country. That is a hostile act. So why are we sending money to a country committing hostile acts against us?”

[…]Carlson asked why, if the migrants are “very good people,” that Mexico doesn’t “let them stay forever and vote in your elections, but remain Guatemalans and Hondurans ‘unto the seventh generation,’ as you said about your own people, about Mexican citizens?”

After a pause, Hernandez awkwardly pivoted again by stating the immigrants are just “looking for a better life.”

Tucker ended the segment by pointing out, once again, that Mexico is a “hostile power that is seeking to undermine our country and sovereignty.”

Remember folks, Russians buying a few ads and sharing a few memes on social media merits launching a new Cold War but Mexico sending tens of millions of people here illegally to claim birthright citizenship and vote in our elections is the epitome of Pure Americana!