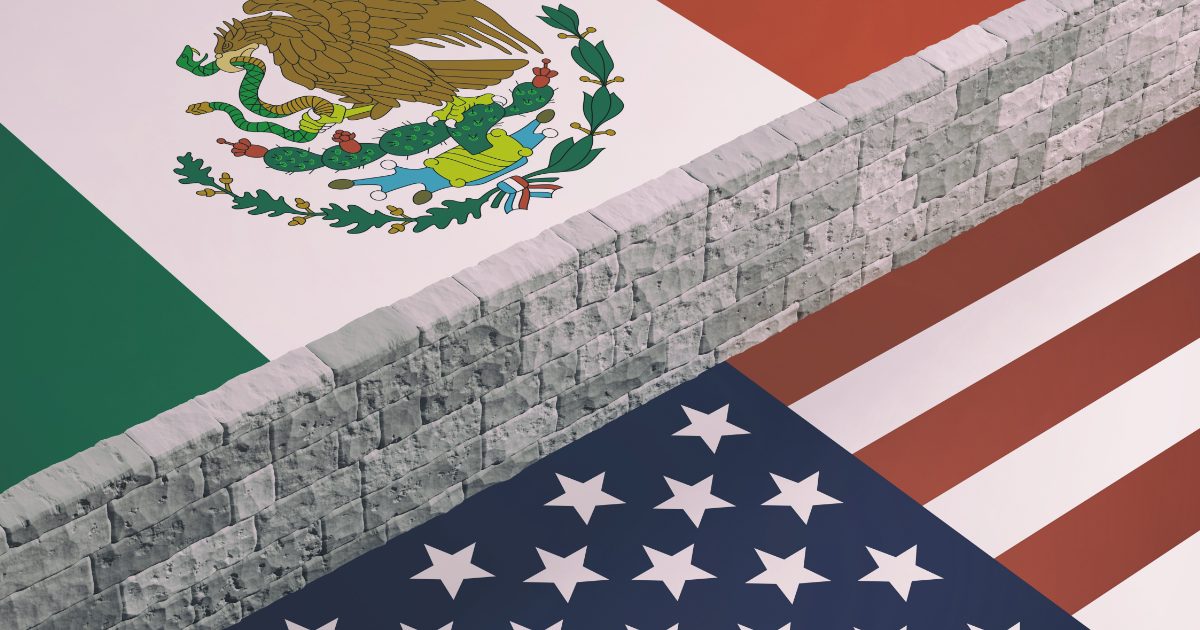 And, so it begins. In the article “Trump Admin Works With Mexico To Align On Asylum – US Citizens Get Shafted” at Freedom Outpost, Trump administration officials stated they were working with Mexico on a “safe third country” asylum “deal” to stem the tide of illegal alien invasion in the united States. President Trump has proposed imposing tariffs on Mexico in order to coerce the lawless nation into assisting the US in securing its borders by enforcing current Mexican immigration and asylum laws. Mexico has fired back, issuing what Ildefonso Ortiz and Brendan Darby at Breitbart News term a “veiled threat”, claiming without the Mexican government’s assistance 250,000 more Central American migrants would be crossing in the united States.

Mexico’s top diplomats issued a veiled threat to the U.S. government suggesting that without their efforts, 250,000 more Central American migrants could proceed north. The statement follows President Donald Trump’s threat of raising a 5 percent tariff if Mexico does not strengthen its borders.

“Without these important Mexican efforts in immigration matters, the U.S. would receive 250,000 additional migrants, only in 2019,” the prepared statement revealed. The veiled threat was buried at in the middle of a document where Mexican officials claimed to have deported more than 80,000 migrants and arrested 400 suspected smugglers in conjunction with U.S. officials.

As Breitbart News reported, U.S. immigration authorities are apprehending record-setting groups of migrants in a trend that is expected to reach more than 1 million persons by the end of fiscal year 2019.

In recent months, Mexican officials have provided buses and security for thousands of migrants moving to the U.S. border with increasing efficiency. In February, the border state of Coahuila provided 49 buses to move nearly 2,000 migrants to Piedras Negras, where the migrants expected to cross into Texas and request asylum.

The US would only receive those additional illegal alien invaders because federal government officials refuse to enforce vigorously our immigration laws, close “asylum” loopholes, and call up the citizen militia to repel this invasion, using whatever force is necessary.

If anyone knows history, an agreement isn’t worth the paper it’s written on when one of the parties refuses to honor the agreement. It happened with an agreement between Stalin and Hitler, where Hitler unilaterally decided to invade Russia instead of honoring the non-aggression agreement Germany had with Russia. It happened with an agreement between Hitler and the United Kingdom’s Neville Chamberlain. Mexico is a lawless, corrupt, cartel controlled nation that may or may not honor any agreement that does not benefit it in some way. After all, Mexico has been helping illegal alien invaders cross their country to enter the united States in violation of an agreement on asylum with the United Nations.

While this writer has maintained that a “safe third country” agreement with Mexico will not stop the entry of illegal alien invaders into the US for multiple reasons, Kris Kobach, writing for Breitbart News, expresses a differing opinion.

Kobach, General Counsel of We Build the Wall and immigration policy expert, wrote:

The President said that the tariffs will be remain in place unless and until “Mexico substantially stops the illegal inflow of aliens coming through its territory.” What that means is open to debate; and it was probably intentionally left vague.

But there is no doubt what it should mean. Mexico must immediately sign a “safe third country” agreement with the United States, similar to our agreement with Canada. This would require asylum applicants to file their asylum application in the first safe country they set foot in (so applicants in the caravans from Central America would have to seek asylum in Mexico, rather than the United States).

In announcing the tariffs, President Trump suggested that Mexico should also start enforcing its own immigration laws against the migrants who illegally cross through Mexico en route to the United States. He is absolutely right. Mexico should arrest and deport those migrants back to their home countries in Central America, rather than simply encouraging them to continue north to the United States.

But that’s not enough. It doesn’t address the incentives that induce the Central Americans to illegally migrate to the United States in the first place. Perhaps the biggest incentive is the breakdown of our asylum system caused by the flood of illegal aliens who have no valid claim to asylum. As I have previously written, they come to the United States, make a bogus claim of asylum based on poverty or crime (rather than a valid claim based on persecution by their government), and enjoy a six-year delay in the United States until their asylum hearing.

Hopefully, this will be the first item on the table when the negotiations with Mexico commence.

If a safe third country agreement is not achieved, then crisis will likely continue.

Everyone should agree that sovereign nations enforce their own immigration laws. However, if that nation does not, another sovereign nation possesses no authority to “force” that nation to do so. Tariffs proposed by Trump through executive order violate the tenets of the Constitution and will do nothing to convince Mexico to enforce its own immigration law and/or keep Central American invaders from crossing into the united States.

While it is true the incentives the united States offers to illegal alien invaders entices them to trek to our southern border, the loose asylum claims honored are just the tip of the iceberg. They come for the “freebie” handouts provided by US taxpayers. They come because of the promise of some type of amnesty and citizenship from both political parties. Last, but not least, these illegal alien invaders come for the “preferred” status afforded to them by all levels of government. It’s a sad day in America when illegal alien invaders and their families can displace football with soccer in schools, marginalizing citizen children who seek athletic scholarships for college, as happened in the case of Dennis Michael Lynch’s son. Closing these “freebie” incentives and nixing the “preferred” status afforded to illegal alien invaders would do wonders to cease the flow into the US.

Those supporting Trump’s measures of tariffs to “force” Mexico to enforce its immigration laws and compel the corrupt nation into entering a “safe third country” asylum agreement fail to address how this “agreement” would “force” illegal alien invaders to apply for asylum in Mexico first. Just like with the united States, these illegal alien invaders will find a way to cross the Mexican border undetected, traverse the nation to our southern border where they will cross undetected into the united States. In all seriousness, someone should explain to the American people how a “safe third country” agreement between Mexico and the US would cease illegal alien invasion across our borders. And one can hardly use Canada as an example since that border is essentially open for anyone and everyone to cross.

Kobach noted how serious the issue has become for the US.

The numbers illustrate just how dire the situation is. May was the third month in a row that border apprehensions exceeded 100,000. And it was the highest monthly total in over twelve years. More than half a million have been apprehended since October 1, 2018.

To be sure, President Trump’s tariffs to compel Mexican cooperation are unprecedented. But so is the migrant crisis we are facing. It is unlike anything the United States has seen before. The President’s actions are exactly what is needed. Now we need him to hold firm until Mexico signs a safe third country agreement. Anything short of that would be insufficient to stem the flow of migrants.

This number does not include how many crossed undetected to enter the united States, meaning that a number could be three times as high. This crisis has been ongoing since the illegitimate Hussein Soetoro administration. Illegal alien invasion, while always an issue on US borders, ramped up significantly due to the invitation extended to Central Americans by the former administration, Democrats, Republicans and advocates and promises of amnesty and citizenship. The invasion decreased early on in the Trump administration, but began increasing almost exponentially because of the floating of amnesty and citizenship by Trump for children brought into the US by their parents and through covert measures employed by Democrats, their sycophants, and illegal alien invasion advocates.

Kobach describes Trump’s tariff action as unprecedented but claims the action is warranted due to the illegal alien invasion crisis occurring at the US border. However, the president unilaterally, without congressional involvement, to assess a tariff against another country is unconstitutional and outside the power authorized to the president. The action might be warranted; but, it is up to Congress to legislate the tariff. One cannot and should not condone an unconstitutional action by a branch of government because of a “crisis” or is warranted. But, it is what citizens demand and accept when it is their team captain performing the action.

Trump’s actions are not what this republic needs to stem the tide of illegal alien invasion. What is needed, as mentioned in the previous article at Freedom Outpost, are measures authorized in the Constitution – calling up the citizen militia – to stem the tide of this invasion that has tremendous impact on citizens, ending the welfare/warfare state, applying the law equally to everyone, and ending “preferred, protected” status of the pet groups of the federal government. Condoning unconstitutional actions leads to tyranny and despotism. With the actions of Congress and presidents, including this one, that have stripped away most of the rights of the people and working to eradicate the rest, citizens should have learned the lesson by now.