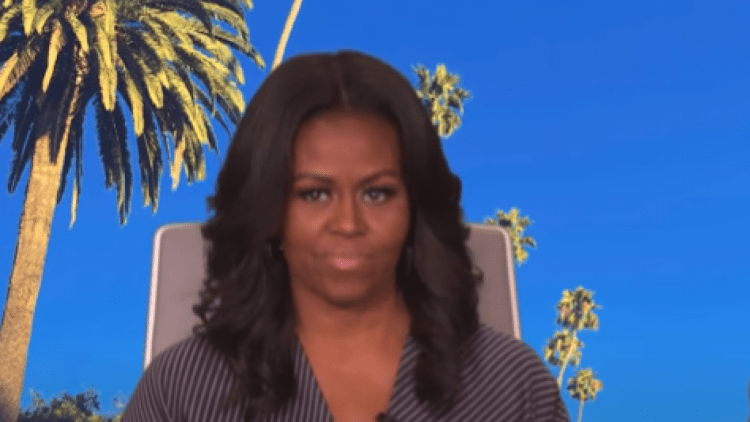 Michelle Obama once again falsely claimed that the Black Lives Matter race riots which wounded hundreds of police officers, killed multiple people, including a black 8-year-old girl in Atlanta, and caused over $2 billion in damage, were “peaceful”.

Twitter and social media did not slap a disputed tag on Obama’s blatant lie which she has repeated many times.

First, Michelle Obama celebrated Warnock, a racist pal of her husband’s violently racist mentor Jeremiah Wright, followed by the false claim that the Capitol rioters had been let off easy.

“And once authorities finally gained control of the situation, these rioters and gang members were led out of the building not in handcuffs, but free to carry on with their days,” Michelle Obama falsely claimed.

Last time I checked, four people are dead. One of them, Ashley Babbitt, a QAnon supporter, was shot and killed despite being unarmed. Had the races and politics in that encounter been reversed, there would be mass riots and looting in her name. And Michelle knows it.

Federal and D.C. authorities are also tracking down and arresting the people who got inside.

Meanwhile the vast majority of BLM rioters and gang members are free and immune from consequences even when they’ve committed assault and murder.

It should also not be forgotten that the racist black supremacist hate group got its backing from her racist husband, whose mentor, like that of Warnock’s, liked to shout, “God Damn America”. Michelle’s concern trolling for the country she was only briefly proud of when she ruled it falls flat.

“But there’s one question I just can’t shake: What if these rioters had looked like the folks who go to Ebenezer Baptist Church every Sunday? What would have been different?”

Come on, Michelle knows the answer to that one.

1. They would have gotten a plaza named after them

2. Every major corporation in the country would have expressed support for them and showered them with cash

3. Anyone who criticized them would have been fired from their jobs

Did I miss any of the rewards that BLM gained from its riots?

If wounding hundreds of police officers, destroying $2 billion in property, and killing an 8-year-old girl is Michelle Obama’s idea of an overwhelmingly peaceful movement, what would she think is violent?

Apparently any movement she doesn’t support.

“And yet, in city after city, day after day, we saw peaceful protestors met with brute force. We saw cracked skulls and mass arrests,” Michelle Obama continues to lie.

Here’s what we actually saw.

18 officers were injured in Philadelphia after they were hit with everything from bricks, to rocks, to Molotov cocktails, during the riots in Pennsylvania. 2 officers had head injuries while 7 suffered chemical burns to their faces. 1 officer was run over by a car and is in stable condition at the hospital.

33 police officers were injured and 47 police vehicles were damaged in the violent riots in New York City.

132 Chicago police officers were injured in the leftist riots. Some of the wounded officers suffered broken bones. One experienced a heart attack and 2 of the officers needed surgery.

Over 60 Secret Service officers and special agents were injured and six vehicles were destroyed as federal officers were punched and kicked, had bottles and rocks thrown at them, and were spit on by the racist radicals in D.C. 11 D.C. officers also suffered injuries, including one who was hit by a brick.

Overwhelmingly peaceful. As peaceful as her husband’s eight years of tyranny, repression, and political terror.