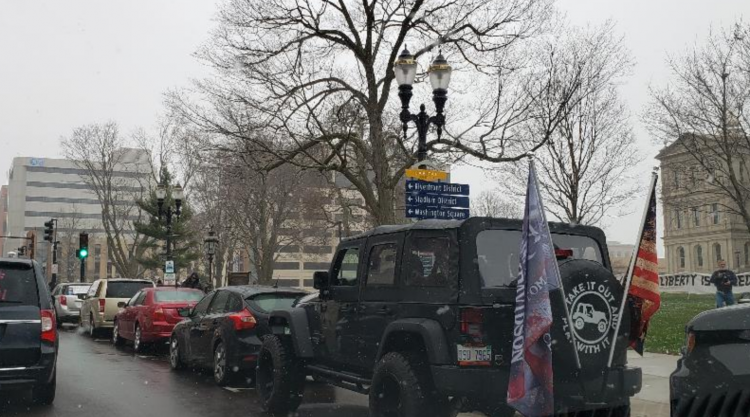 More and more states are seeing the people have had enough of their rights being infringed upon unlawfully by tyrannical governors, who are pushing an agenda based on a hoax. Michigan is the latest to get in on the action and start calling on tyrannical Governor Gretchen Witmer to stand down from her usurpation of power in the state to force unlawful stay-at-home orders.

FOX 2 our to Detroit reports:

We are all concerned for those afflicted with COVID 19. Yes, many of the personal behaviors we have been reminded to use are good practices. Wash your hands. Cover your cough. Stay home if you are sick,” read a note on the MCC’s website. “That said, Michiganders are fed up!”

Arguing that more emphasis be placed on reopening business, many residents are worried the restrictive social distancing measures add only a marginal benefit at the expense of the state’s economy.

The protest was supposed to start at noon on Wednesday but people were already packing the roads by 9 a.m. and hundreds of people were standing in front of the Capitol and not social distancing. More drivers were jammed on Capitol Ave, where the one-way three-lane road was bumper to bumper for several miles north of the Capitol.

FOX 2’s Charlie Langton was social distancing among the crowd who told them they were not social distancing because it was their right not to do so but they understand the health crisis. They said they wish Gov. Whitmer had more faith in them not to get infected.

Here’s some tweets and video from the protests.

While Whitmer acknowledged the pressure her constituents were under as the economy sputters, she’s also rebuked calls to ease restrictions – arguing she’s “got to listen to medical experts to know when and how it’s safe to reengage our economy.”

Some feel that their constitutional rights have been infringed by the order, however. On Tuesday, four Michigan residents filed a federal lawsuit against Whitmer and her order, claiming their right to associate with their friends and family was being abused.

“It’s taking a sledgehammer to an ant,” said attorney David Helm on Tuesday. “We believe it is over-broad and over-reaching. There is a way to do it appropriately without infringing on Constitutional rights like the governor has.”

Other states are rising up too in a similar manner in their own way to call for an end to the tyranny against the economy and the rights of the people.

In fact, just so people know, most of these “medical experts” the governor speaks about won’t even tell the people the truth about viruses, as we have done.

We also know that the media is going along with the hysteria to promote an agenda, and even social media wants to put people in time out if they disagree with the official lying narrative from lying politicians, lying bureaucrats and lying reporters.

In fact, the real cause of what is going on probably has more to do with the new technology being rolled out in the form of 5G than it does a non-contagious virus.