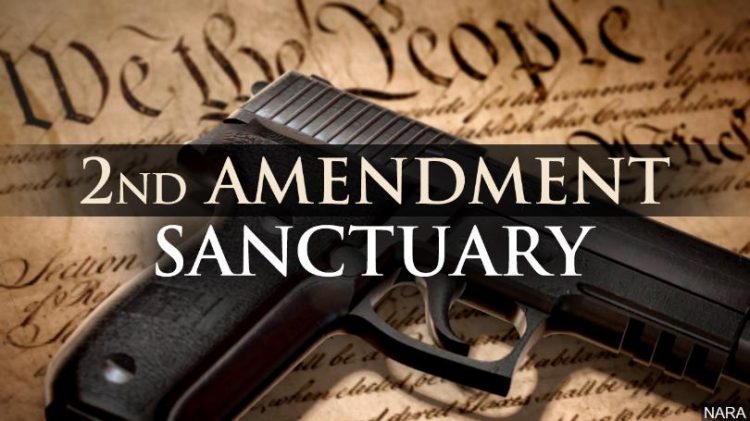 The Virginia effect is taking place across the country as many counties in several states are becoming Second Amendment Sanctuary Counties in defiance of the tyranny of gun grabbers and gun confiscation advocates, including those who have advanced and promoted unconstitutional red flag laws. The latest state to where this has spread is Michigan.

As of Tuesday night, Delta County is officially a Second Amendment sanctuary county.

This comes after a 3 to 2 vote by Delta County Commissioners at a regular Tuesday night meeting.

Delta County approving the symbolic resolution allows them to follow in the footsteps of a handful of others in the state.

“Five counties so far in the state of Michigan have done it,” says commissioner David Moyle. “We’re expecting another 18 in the next week or two.”

Before the vote, dozens of community members took to the podium to declare their support or concerns during public comment in a standing room only courtroom.

However, this resolution is not an end-all, be-all. It is more symbolic than anything.

The resolution reads in part:

“…the people of Delta County, Mich. affirm their support to the sheriff to exercise sound discretion to not enforce against any citizen unconstitutional firearms laws…”

The resolution will also be sent to state representatives to inform them of the county’s stance against red flag laws.

While no gun control legislation is currently proposed, the passage of red flag laws in Virginia and other states, as well as Governor Gretchen Whitmer’s past support of red flag laws has put gun owners in the state on alert.

A 92 thousand-member-strong Facebook group named “Michigan for 2A Sanctuary Counties” is one way gun rights activists are mobilizing throughout the state.

“When we have the people standing up and representing what they want for their values, good things happen,” the founder of the group, Jeff Fuss, told a local NPR station.

Fuss described how gun control groups hide the true nature of red flag laws by claiming they target people who shouldn’t own guns, like the mentally ill.

“Nobody is going to be against a common sense idea like that,” he said. “It never comes from a common sense idea. Laws are different than ideas. And laws are just stepping stones for them on the way to gun confiscation just like what you see in Virginia.”

Well, I’m one of those that opposes the idea.

Our Constitution is clear and protects even those the government claims are “mentally ill.” There are protections against taking their property unless they have committed an actual crime. It’s called the Fifth Amendment.

Would many support taking arms from our veterans with PTSD who might be labeled “mentally ill” due to that matter? Some have. I don’t.

That needs to be a whole lot clearer rather than providing a knee jerk reaction to the catchphrase “mentally ill,” although I agree with Mr. Fuss on the matter that they are advancing an agenda, not protecting the rights of the people and certainly not upholding the law that protects those rights.