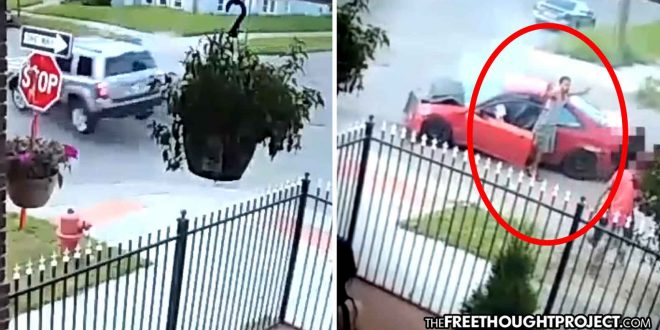 Detroit, MI — When police officers break the law and and hurt innocent people, it is often standard procedure for them to go on the offensive and begin blaming the victims. This is often backed up by media coverage and the public propagandized by “initial statements” and reactions before any actual investigation is conducted. Even when these incidents are captured on video, clearly showing the innocent injured party, police will go to extreme lengths to refuse to take responsibility for their actions. As the following video illustrates, they will even arrest innocent people, despite clearly being in the wrong.

Carlos Martinez was driving home Wednesday night around 9:15 p.m., when two undercover Michigan State Troopers in an unmarked SUV plowed through a stop sign. Martinez did not have a stop sign and was lawfully continuing through the intersection when the two cars collided. When Martinez’ red Honda collided with the unmarked Jeep, the Jeep spun out and the impact injured Martinez.

Not knowing what was happening, Martinez complied. That’s when the troopers moved in to handcuff and arrest him. He had done absolutely nothing wrong.

“They were treating him like he was an illegal,” said Maria Martinez, Carlos’ mother.

The cops couldn’t have cared less about the fact that Martinez was injured when they ordered him to the ground, they never even asked him. Instead, because they messed up, they immediately began treating their victim like a criminal.

“My son wasn’t sure if it was a (taser) or a gun, so he was scared,” Martinez said, who also told 7 Action News “that troopers were rude and even tried to steer them away from the scene of the crash when they went to check on their son. She said some troopers at the scene tried to make her believe that her son was involved in a crash at a different location.’

Despite the fact that the entire incident was captured on a resident’s surveillance system clearly showing the troopers run a stop sign, and clearly showing Martinez having the right of way, a spokesperson with the Michigan State Troopers said they have yet to establish who is at fault. They said they will examine the black box from Martinez’ car to establish whether or not he was speeding.

Luckily for Martinez, he was not killed as police crashes often turn out deadly for those involved. As TFTP previously reported, on average, one person every day is killed by a police officer driving a car.

To put this into perspective, that’s larger than the number of people killed by floods, tornadoes, lightning, and hurricanes — combined.

Contrary to popular thinking, high-speed chases aren’t only dangerous for those involved. Innocent bystanders are all too often the victims of these reckless pursuits and careless driving as evidenced above.

According to the report, more than 5,000 bystanders and passengers have been killed in police car chases since 1979. Tens of thousands more were injured as officers repeatedly pursued drivers at high speeds and in hazardous conditions.

What’s more, as this case illustrates, to alleviate their liability, police will often times charge the victims with the crime—even when they did nothing wrong.

Joan Raye, 78, is lucky to be alive after a Franklin County Sheriff’s made the dangerous decision to speed over 80 mph through a neighborhood and plowed into her vehicle. In spite of the fact that the deputy hit her, however, just like Martinez, this poor elderly woman was charged with a crime for his negligence.

According to the sheriff’s department, Raye failed to yield to the deputy who was traveling well above the posted speed limit on his way to an officer in distress call. The deputy’s concern for his fellow brother in blue appeared to clearly outweigh the safety of the countless families and bystanders he put at risk driving at such a high rate of speed through the residential area.

Because the deputy was traveling at such a high rate of speed, the elderly woman did not see or hear his lights and sirens and when she saw the chance to take a left turn onto her street, she did.

Police crashes are so common that there is an advocacy group who is trying to fix this problem.

The market is also responding to the crisis and has brought forth the star chase system. Instead of haphazardly launching into a chase with an individual, police can tag their car by firing a compressed air ‘tag’ which allows them to immediately track a fleeing vehicle. Of course, there are 4th Amendment issues if these tags were put to use by corrupt cops, but it’s a start.

Even the police themselves have been forced to bring their dangerous driving records into question.

Share this article with your friends and family in hopes that we can start to save a life every day, instead of ending one.