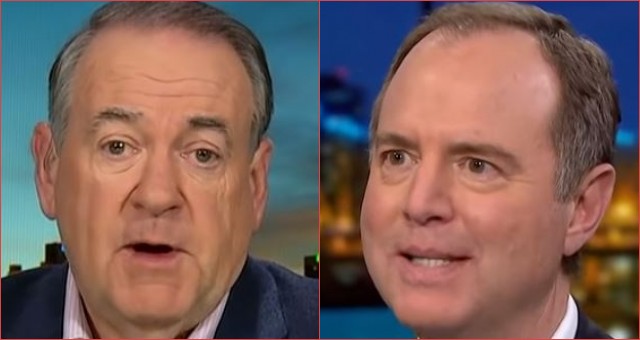 (TNS) Former Arkansas Gov. Mike Huckabee dropped a huge truth bomb during a Sunday morning interview on Fox News as he hit back against claims by Democrats that President Donald Trump should have ‘informed Congress’ before he took out Iranian Gen. Qassem Soleimani this week.

Specifically, Huckabee took a potshot at House Intelligence Committee chair Adam “Leaker” Schiff (D-Calif.), noting (accurately) that had the president informed Congress prior to the strike, he would have betrayed the country by informing Iran.

In fact, any number of Democrats, based on their post-attack responses, would have alerted the Iranian regime to what was coming, we’re certain of that.

“The president oughta be applauded,” he said. “I can’t imagine what’s wrong with people if they want a country to be a loser country, a patsy, a country that always apologizes for being strong, then vote for these Democrats. I’m just beyond offended.”

“It was an American celebration to get rid of this guy behind 9-11… Well, Nancy Pelosi and all of the Democrats were whining because they didn’t get notified. Can you have seen telling Adam Schiff in advance?” Huckabee continued.

“He would have held a press conference and even given the coordinates of where the attack was going to take place. These people aren’t trustworthy. More than that, he did notify them in the 48 hours that was required,” he added.

Absolutely right. Schiff, had he been alive, would have tipped off the Germans we were landing at Normandy if he was a political enemy of FDR.

We’re not sure what’s worse, the fact that we believe this or the fact that it’s entirely possible that, in order to “get Trump,” we have members of Congress who would screw the entire country over in the process, even to the point of endangering American lives.

After all, Hillary Clinton did it in Benghazi — sacrificed four Americans including a U.S. ambassador, just for political expediency.

And of course, she did so on behalf of Obama.

If the Democrat Party was ever really pro-America, those days are long gone.