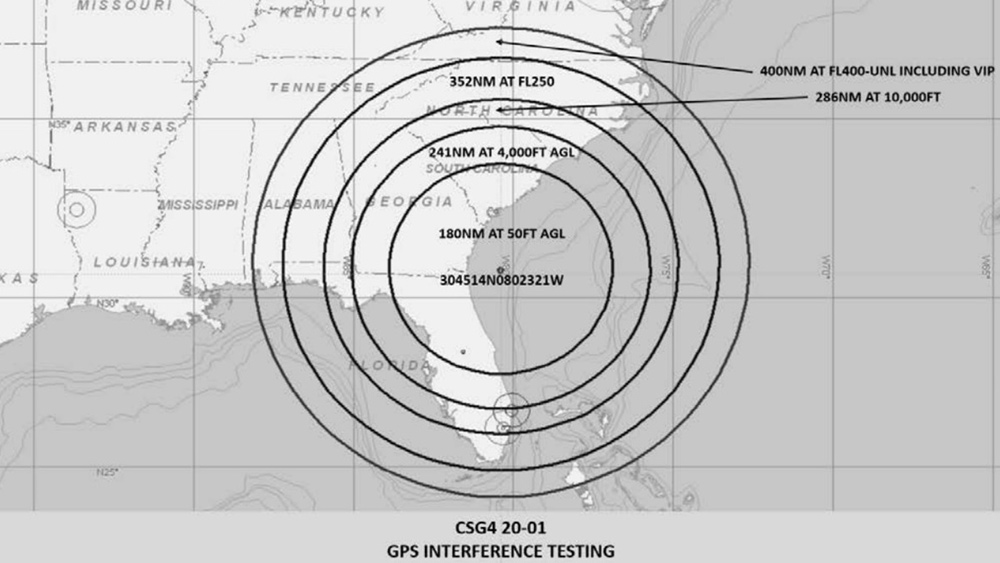 (Natural News) In case you didn’t fully realize that something big is about to take place in America, file these two facts in your brain:

Fact #1: The U.S. military, Carrier Strike Group Four (CSG4), is jamming GPS signals from Jan 16th – 24th, which may overlap the planned deep state false flag event in Richmond, Virginia. Richmond is just at the margins of the range of the GPS jamming exercise map released by the military (see below). The epicenter of the so-called “exercise” is off the coast of Georgia. The official FAA announcement claims no jamming will take place on Monday, Tuesday or Wednesday next week, but we don’t trust the FAA, so your mileage may vary. Remember, too, that 90% of the American population below the age of 30 has never read a paper map and can’t use a compass.

The GPS jamming exercise continues through Jan. 24th and effects South Carolina, North Carolina, Virginia, Eastern Tennessee, Alabama and all of Florida. The AOPA (Aircraft Owners and Pilots Association) has posted details of the warning here.

The FAA has also issued a flight advisory warning aircraft pilots that GPS will fail for “several hours each day” during this military jamming exercise. See:

Here are the areas that will be impacted:

Note that this is the U.S. military testing GPS jamming capabilities in anticipation of an event that would require such jamming (obviously). Consider the convergence of events now shaping up:

– The impeachment trial of President Trump by the U.S. Senate, presided over by the treasonous sellout SCOTUS Justice Roberts, who already sold out America to Obama under the wildly unconstitutional “Obamacare” decision years ago.

– The Jan. 20th “Lobby Day” event in Richmond, Virginia, where deep state operatives are absolutely trying to put together a false flag event to cause violence and blame gun owners.

– The Mysterious drone flights over Colorado, Oklahoma and Nebraska, recently followed up by an emergency meeting with the Oklahoma legislature on a military base, where they were briefed about something “horrific” and “life altering.”

– The FBI’s sudden attempts to confiscate high-end night vision tubes from distributors, indicating an emergency need for night vision capabilities in an agency led by a treasonous traitor (Chris Wray) and that has a long history of planning and carrying out terrorism plots across America, according to the New York Times and the Kansas City Star.

Fact #2: The FBI is now claiming “imminent domain” to essentially seize high-end night vision tubes (that power night vision goggles) from distributors in the United States. This indicates the FBI has an emergency effort under way to acquire large numbers of night vision devices in anticipation of some urgent event which will take place at night (possibly another FBI false flag operation like Oklahoma City or the 1993 attempted World Trade Center bombing which was entirely masterminded by the FBI).

As Dave Hodges is reporting from The Commonsense Show, Bob Griswold from ReadyMadeResources.com relates a shocking event where he had already locked in the purchase of 70 night vision tubes from his distributor, and had those tubes invoiced and committed. Within hours, the FBI claimed imminent domain over the tubes, effectively “seizing” them from Ready Made Resources before they could even be shipped.

We reviewed a letter written to RMR by their distributor, confirming that the government preempted the order to RMR and claimed they had ownership over the gear because they were the government.

An hour ago, I spoke with Griswold on the phone to confirm the situation, and he told me he thought there were, “No more than 200 high-end night vision devices remaining in the entire country.” (This excludes the crappy gen 1 and gen 2 night vision devices, which nobody wants anyway.)

I’m told that inventory units are flying off the shelves and will be gone everywhere in the next 1-2 business days. Yes, there is a run on night vision in America, happening right now.

Here’s the relevant question: What is the FBI planning that would require hundreds of night vision devices?

Answer: Probably another bombing, mass shooting, mass casualty event or some other terrorism flashpoint that the FBI is famous for causing. Just ask the church members of Waco, Texas… or not, since they’re all dead, thanks to the FBI and ATF.

Earlier this week, Alex Jones declared on his broadcast that the deep state was going to “attempt to assassinate Trump next week.” Could this military exercise, and the FBI night vision devices, and the drones scanning the Midwest all be related?

Listen to my urgent false flag warning podcast which covers the possibility of deliberate violence being staged for Monday, Jan. 20th, in Richmond, Virginia:

The deep state is igniting TOTAL WAR against America

Get prepared, America. The deep state is about to unleash total war against us all. They plan to kill the President, criminalize the Second Amendment, destroy the First Amendment, crash the economy, start race riots and basically plunge the country into nationwide chaos.

It’s long past time to just arrest all these left-wing traitors and throw them in prison, as All News Pipeline correctly reports: “It’s time Democrats are charged with treason and sedition and held accountable for their high crimes upon America.”