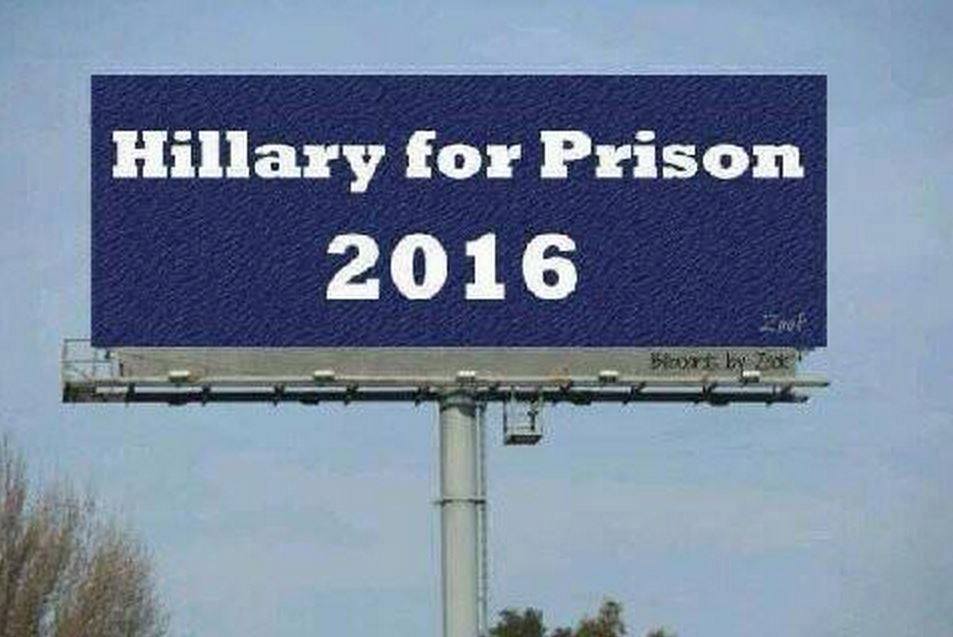 During the 2016 presidential campaign, Donald Trump and his “deplorable” supporters repeatedly called for “locking up” Hillary Clinton for her illegal use of a private email server when she was Obama’s secretary of state.

If you’ve wondered why President Trump hadn’t “locked her up,” you should know it is not for his lack of will.

According to the New York Post, the New York Times reported yesterday that earlier this year, President Trump attempted to have Hillary Clinton and former FBI director James Comey prosecuted by the Justice Department, but was dissuaded by White House counsel Donald McGahn.

McGahn warned President Trump he had no authority to order a prosecution and warned that the move could lead to impeachment.

A lawyer for McGahn said that “to his knowledge,” Trump had “never ordered that anyone prosecute Hillary Clinton or James Comey.” But the lawyer, however, did not address whether the topic of prosecuting them had been discussed.

Does this mean Hillary will never be prosecuted?

But on September 5, 2018, during Day 2 of the Senate confirmation hearing for Supreme Court nominee Judge Brett Kavanaugh, Sen. Lindsey Graham (R-SC) asked Kavanaugh a series of very interesting questions that seem to make a case for American citizens being subject to military tribunals.

Here’s my transcript of the Graham-Kavanaugh Q & A:

Graham: So when somebody says, post-9/11, that we’d been at war, and it’s called the War on Terrorism, do you generally agree with that concept?

Kavanaugh: I do, senator, because Congress passed the authorization for use of military force, which is still in effect. That was passed, of course, on September 14, 2001, three days later.

Graham: Let’s talk about the law and war. Is there a body of law called the law of armed conflict?

Kavanaugh: There is such a body, senator.

Graham: Are there differences between those two bodies of law?

Graham: From an American citizen’s point of view, do your constitutional rights follow you? If you’re in Paris, does the Fourth Amendment protect you as an American from your own government?

Kavanaugh: From your own government, yes.

Graham: So, if you’re in Afghanistan, do your constitutional rights protect you against your own government?

Kavanaugh: If you’re an American in Afghanistan, you have constitutional rights as against the U.S. government.

Graham: Isn’t there also a long settled law that goes back to the Eisentrager case (I can’t remember the name of it)….

Graham: Right, that American citizens who collaborate with the enemy are considered enemy combatants?

Kavanaugh: They can be, they’re often, sometimes criminally prosecuted, sometimes treated in the military.

Graham: Let’s talk about can be. I think there’s a Supreme Court decision that said that American citizens who collaborated with Nazi saboteurs were tried by the military, is that correct?

Kavanaugh: That is correct.

Graham: I think a couple of them were executed.

Graham: So, if anybody doubts there’s a longstanding history in this country that your constitutional rights follow you wherever you go, but you don’t have a constitutional right to turn on your own government and collaborate with the enemy of the nation. You’ll be treated differently. What’s the name of the case, if you can recall, that reaffirmed the concept that you can hold one of our own as an enemy combatant if they were engaged in terrorist activities in Afghanistan. Are you familiar with that case?

Graham: So the bottom line is on every American citizen know you have constitutional rights, but you do not have a constitutional right to collaborate with the enemy. There is a body of law well developed long before 9/11 that understood the difference between basic criminal law and the law of armed conflict. Do you understand those difference?

Kavanaugh: I do understand that there are different bodies of law of course, senator.

Interestingly, both Mark Taylor (the firefighter prophet who predictedTrump’s presidency in 2011) and former CIA officer Robert David Steele believe the Left’s rabid but unsuccessful takedown of now Supreme Court Justice Brett Kavanaugh was because of their fear of military tribunals.

“We just gotta walk in faith right now. With everything that is coming, people need to prepare themselves for what’s coming…. The Kavanaugh thing — everybody thought that it was about Roe versus Wade. Well it is, but it isn’t. You have to go back to the line of questioning that Lindsey Graham did. I’m paraphrasing: he asked him [Kavanaugh] in front of the entire nation. He said if a civilian is charged with treason, can they be charged under civil law or military law, and he said military law.

Sure, that was a nuclear bomb that went off in the spirit for the enemy, for the Cabal, the elites, the globalists, everyone who’s been in the corruption in this country who’s a leader and abroad…. That sent shock waves…. They were disguising it as Roe versus Wade, trying to pull on people’s emotions and their heartstrings, ‘Oh no, we can’t get rid of Roe versus Wade!”. It had nothing to do with that from these elites, people like Dianne Feinstein. It had nothing to do with that. It had everything to do with the military tribunals that are coming. They know they needed a solid 5-4 [Supreme Court] vote because he [Kavanaugh] was replacing a swing vote [Anthony Kennedy] if you remember. Now, [with Kavanaugh in the Supreme Court] we have a solid 5-4 vote for anything that would come up through the Supreme Court right now and that’s what the President needed in place….

The second that Kavanaugh is confirmed, the clock starts. When he got confirmed, the clock has started. So now all these things that are starting to take place, you’re starting to see movement now, even publicly you’re starting to see movement. There was some stuff on Jeff Sessions today…. Now comes the pain. Pain is coming for these people, the justice is fixing to be served. So we have to be patient and just realize there’s a plan in place, but this Kavanaugh, Judge Kavanaugh, was a huge, huge deal.”

Beginning at the 12:30 mark in the video above, Steele is asked what is the real reason why the Democrats went after Kavanaugh. Steele said:

McCain sold out to the Saudis, to the Israelis, to a whole bunch of other people. McCain sold out on the POWs. McCain supported Hillary Clinton in selling Syria and Yemen to Saudi Arabia, and selling Libya to the French, and selling Uranium One to Russia. McCain and [Hillary] Clinton were actually much, much closer than people realized. He was essentially a traitor to the United States of America at mutiple levels across decades.

Lindsey Graham has had his issues, but if you look at Lindsey Graham carefully right now, you will see that he has made his peace with Donald Trump and he is now rendering vital service to the nation and God bless him…. In my humble opinion, Lindsey Graham has been born again, all is forgiven. He is now serving the Republic in a very, very important way. And the reason Kavanaugh is being taken down is because the deep state which relies heavily on the Democrats is terrified of military tribunals. We are still in a state of war. Technically, the United States is in a state of war.”