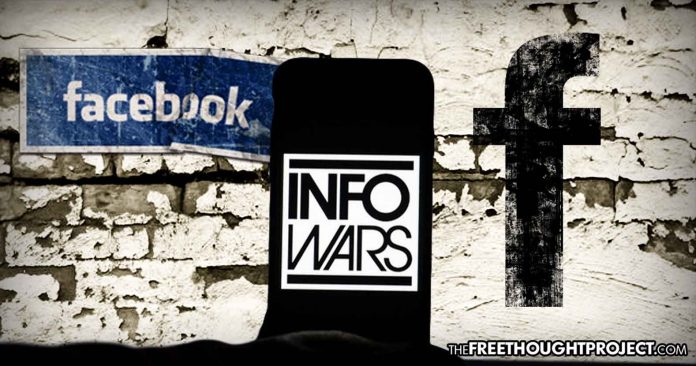 In one of the most disturbing moves by Facebook we’ve ever seen, the platform banned Alex Jones and other controversial U.S. political personalities for violating the social media company’s policies on “dangerous individuals and organizations.”

Most of the individuals who’ve been unilaterally wiped off the face of the largest social media space in the world are far right activists like Milo Yiannopoulos, Laura Loomer and Paul Joseph Watson. However, in a seeming move to appease those on the right who advocate for equal censorship, Facebook also banned far left Nation of Islam leader Louis Farrakhan.

While Facebook has previously banned Infowars from their platform, they allowed personal pages to stay up, but this was apparently too much for the platform to handle. Yes, some of the things Infowars and Alex Jones say are utter nonsense and borderlines on hysterical Islamaphobia. The Free Thought Project has — on more than one occasion — written entire pieces condemning some of the things said by Alex Jones and the other folks at Infowars.

Never, however, have we advocated for the silencing and banning of any group. But this time, Facebook reportedly went a step further than just banning Infowars content on their website. According to reports, they are promising to ban groups and individuals for merely sharing their content.

As the Atlantic reports:

JONES, YIANNOPOULOS, WATSON, LOOMER, NEHLEN, AND FARRAKHAN ARE ALL PERSONALLY BANNED, AS ARE ANY ACCOUNTS SET UP IN THEIR LIKENESS. BUT USERS MAY STILL PRAISE THOSE FIGURES ON INSTAGRAM AND SHARE CONTENT RELATED TO THEM THAT DOESN’T VIOLATE OTHER INSTAGRAM AND FACEBOOK TERMS OF SERVICE. “WE’VE ALWAYS BANNED INDIVIDUALS OR ORGANIZATIONS THAT PROMOTE OR ENGAGE IN VIOLENCE AND HATE, REGARDLESS OF IDEOLOGY. THE PROCESS FOR EVALUATING POTENTIAL VIOLATORS IS EXTENSIVE AND IT IS WHAT LED US TO OUR DECISION TO REMOVE THESE ACCOUNTS TODAY,” A FACEBOOK SPOKESPERSON SAID VIA EMAIL.

If you think this won’t happen, consider the fact that it already has. Brandon Straka, the former Democrat who founded the #WalkAway campaign was banned from Facebook ahead of a protest in Washington DC because he linked to an interview with Alex Jones.

FACEBOOK JUST BANNED ME AS I AM PLANNING THE #WalkAway March on Washington!!! I have been banned from posting leading up to the March. This is devastated for our ability to reach people!!! I was banned for mentioning my interview with Alex Jones. Can anybody help??? pic.twitter.com/DDozepNaAI

While Facebook is claiming this move is to protect the platform from “dangerous” content, their claims ring hollow given their history of doing the exact opposite.

As TFTP reported last year, after Facebook wiped six million of our users away by deleting all of our pages in the name of “protecting the elections,” we saw instances in which a child was sold on their platform.

In November, an auction was held on Facebook in which a child bride was put up for sale in a public post. People openly bid on Facebook for a 16-year-old girl.

Facebook claims they removed the post, but this wasn’t until the auction had ended and the girl had been sold.

As FOX 59 reports, according to children’s rights organization Plan International, the girl was bid on by five men, some of whom were reportedly high-ranking South Sudanese government officials.

George Otim, Plan International’s country director in South Sudan, where the auction took place, said: “That a girl could be sold for marriage on the world’s biggest social networking site in this day and age is beyond belief.”

As Facebook doles out bans for photos of ET, deletes pages with millions of followers for promoting peace, and censors alternative media, the post selling a human child to a life of slavery was allowed to remain up for 15 days. But that’s not all.

So FB bans all of our pages because we are dangerous to elections of some shit… meanwhile, some groups are literally calling for the death of hundreds of millions of people, and #FacebookPurge is totally fine with them. pic.twitter.com/s4puwAnkyO

In fact, the Red and Black Anarchist page is still up and they just so happen to be celebrating the recent purge of Alex Jones and the like.

Of course, we aren’t advocating for their removal either—although calling for the killing of anyone is illegal and should’ve raised multiple red flags.

In what can be referred to as a horrifying irony these bans come just one day before May 3rd, which is ‘World Press Freedom Day’. On this day to celebrate the freedom of press, the West is banning free press, imprisoning Julian Assange who’s never had to issue a retraction, and calling for the silencing and even imprisonment of organizations and individuals who advocate for vaccine safety. This is 2019 ladies and gentlemen. Remember, like we said last year before all this began — first they came for Alex Jones.