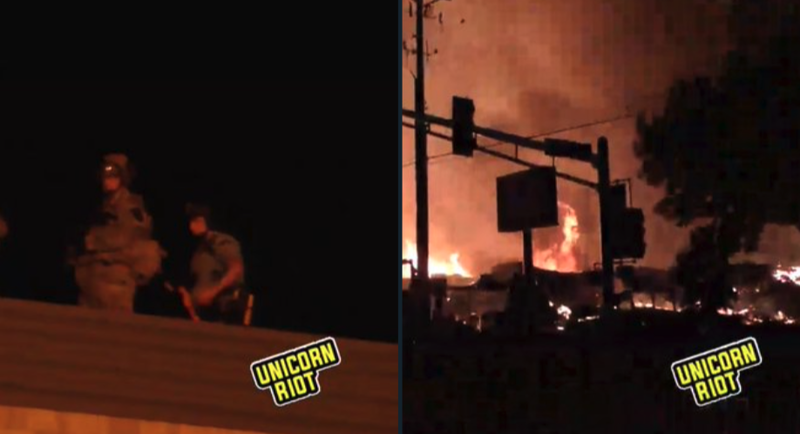 “That’s like five buildings on fire,” one demonstrator said while talking to Unicorn Riot News.

The way this isn’t the beginning of a movie but real life 💀 #Minneapolisriots pic.twitter.com/alvzPoFXA8

A reporter from the Minneapolis Star Tribune tweeted images of the apartment building engulfed in flames.

Housing complex construction site on 29th/26th is on the verge of collapse. Heat is so intense you can feel blocks away. pic.twitter.com/sXbmQyzHCz

Apparently, the apartment building was new construction with no one inside (that has yet to be confirmed).

The fire quickly spread to other structures nearby.

Here are several unbelievable scenes around the apartment complex.

“2020 is really going to go down in the books. This is the typa shit out future kids will read about. This is history in the making,” said one Twitter user while referring to the fires.

Home safe. Can’t believe what I witnessed tonight. Don’t really have much to say.. #minneapolisriots pic.twitter.com/l666KDdsjk

The fire around the apartment building continues to rage early Thursday morning.

Many stores in this “strip mall looted and every window broken,” tweeted one user.

Unicorn Riot News tweeted scenes from outside an AutoZone on Wednesday evening that was burned to the ground.

Unicorn Riot tweeted early Thursday morning that “smoke, fire alarm blaring, sprinklers going off inside Target.” This is the same Target we noted on Wednesday evening that was looted by dozens, if not hundreds of people.

One Twitter user claims an “aldi may have also burned in the fires.”

#aldi may have also burned in the #fires in #Minneapolis #riots #Minneapolisprotests #minneapolisriots #georgefloyd pic.twitter.com/z14SHxgC9t

Protesters were hungry and looted Wendy’s.

A Wendy’s by the precinct got smashed up and tagged pic.twitter.com/D6n5sbhf3j

The situation is getting tense on Thursday morning: “More militarized police have reinforced the roof and perimeter of the MPD 3rd Precinct building. But they’re just kind of standing around and law enforcement clearly has given up trying to control Minneapolis right now,” Unicorn Riot said.

Confirmed by Unicorn Riot but not official: “AutoZone and Wendy’s are all but burned down at this point. Some new condos under construction have gone up in flames as well.”

Unicorn Riot claims “shots were just fired” possibly at the police station, which is the area where much of the rioting has been based.

Police at 3rd Precinct ducking down now after shots were just fired, presumably in their direction pic.twitter.com/9n4tkcmin2

Here’s a live Periscope stream of the destruction, and at 5:51 ET, buildings are still on fire, and rioting continues.

#LIVE from #Minneapolis, many fires still burning by 3rd Precinct building that has been essentially under siege https://t.co/bLVp2TicQv

Mayor Frey tweeted a plea for an end to the violence:

“Please, Minneapolis, we cannot let tragedy beget more tragedy,” the mayor’s tweet read. “The area along Lake has become unsafe. We are asking for your help in keeping the peace tonight.”

And to make matters worse, social unrest has spread to Los Angeles on Wednesday night, where “black lives matter protesters” surrounded and attacked police cars on Highway 101 in response to what was happening in Minneapolis.

To remind our readers, President Trump signed an executive order in March, giving the Departments of Defense and Homeland Security the authority to activate up to one million National Guard and reservists to support the nationwide response to the COVID-19 outbreak. Though, as we’ve noted, the troops could be used across American municipalities to maintain social order.

A perfect storm is brewing across America’s inner cities of extreme wealth inequality, record-high unemployment, an economic crash, hatred towards cops, and months of lockdowns. All there needed to be was a trigger to ignite the unrest, that trigger could be the death of George Floyd.