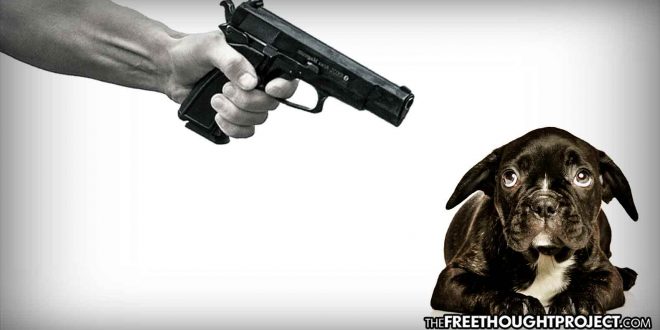 Columbia, MS — An animal shelter and police department came under fire recently after a local woman accused them of euthanizing dogs using cops—shooting them. In a single day, this “no kill shelter” admitted to killing 8 dogs—including a puppy—by having police officers shoot them.

In defense of the officers’ actions, the mayor released a statement last month noting that the officers shooting the dogs was both legal and humane. However, anyone who has watched any number of the countless videos on the Free Thought Project of dogs being shot, knows that shooting a dog is hardly humane.

To be entirely transparent, the city cannot afford to pay a veterinarian to use drugs to put the dogs down, so they rely on the police department to shoot the “unadoptable” dogs.

“We do everything we can to try to find them forever homes,” Mayor Justin McKenzie said. “The shelter is considered a no-kill shelter because we only kill those that are unadoptable for one reason or another.”

Ok, folks, I tried to give the city the opportunity to do the right thing and come clean about the issue of inhumane treatment of shelter animals. There were animals that were determined to be unadoptable or aggressive and needed to be euthanized. However, the animals, including a puppy, were shot instead of being humanely euthanized because the city could not afford to pay for it. When I asked if the animals were humanely euthanized, I was told “according to the state, they were”. All shelter supplies have been provided through donations for months so where did that money go??? How many pictures of available animals have you seen posted on the shelter FB page???

Kilpatrick says that despite the money problem, the shelter is run with almost no oversight and animals are routinely abused.

There is no oversight of shelter employees. The police chief RARELY visits the shelter. The water is green in some of the water buckets. On the day that the heat index was 106, some dogs did not have water. On the day that employees visited the kill shelter, many dogs didn’t have water. Examples of unadoptable dogs: one who gets depressed being locked in a concrete kennel 23 hours and 50 minutes a day and stops eating. Or the dog who won’t potty in her kennel and holds it until someone lets her out 24 hours later. I would like to see the invoices of all of the medical treatment of sick animals. The police chief HIMSELF told me yesterday that half of the cats are sick. I am sick with worry about what will happen to them.

While the mayor’s claim of the dogs being shot in a humane manner is certainly questionable, according to Mississippi state law, it is entirely legal for cops to shoot dogs.

”Any sheriff, constable, policeman, or agent of a society for the prevention of cruelty to animals may kill, or cause to be killed, any animal other than a dog or cat found neglected or abandoned …” the law states.

When Kilpatrick’s post began to go viral, it sparked multiple calls to the police department and forced them to respond.

“This week was one of those rare and unfortunate times in which euthanasia had to take place,” the police department news release said. “Again, this is not our goal nor do we take pleasure in this duty, however it is necessary on occasion for the health and well being of adoptable animals as well as the staff of our facility.”