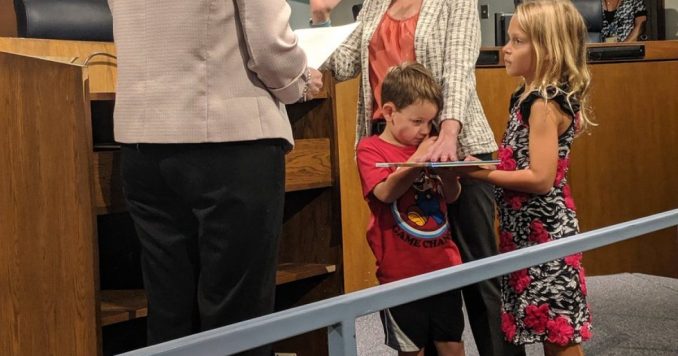 What is this attention whoring but making a mockery of American governance and elected office? She did this in front of her son and daughter, teaching them the same contempt for America. These know-nothings haven’t the vaguest idea of the singular greatness of America and what it was our founding fathers achieved.

A newly elected member of the St. Louis County Council chose to be sworn in with a Dr. Seuss book rather than a Bible.

HER SON AND DAUGHTER HELD THE BOOK FOR DURING HER SWEARING-IN CEREMONY ON AUGUST 13.

A former field organizer at Obama for America, Dunaway said in a Facebook post that the book “offers a message of inspiration to anyone embarking on a new phase of life, whether it’s a high-school graduation, the jump from kindergarten to first grade, or even the next stage of a political career.”

“It’s the same reason you all believe in me and our campaign,” she added, “because I see a brighter future for all of us and am steering myself in the direction of building it!”

Dunaway quoted an excerpt from the book: “You have brains in your head. You have feet in your shoes. You can steer yourself any direction you choose. You’re on your own. And you know what you know. And YOU are the guy who’ll decide where to go.”

She admitted Seuss, born Theodor Seuss Geisel, “was not immune to a male-centric narrative as he sought to inspire… but the message is the same whether the reader is a ‘guy’ or not.”