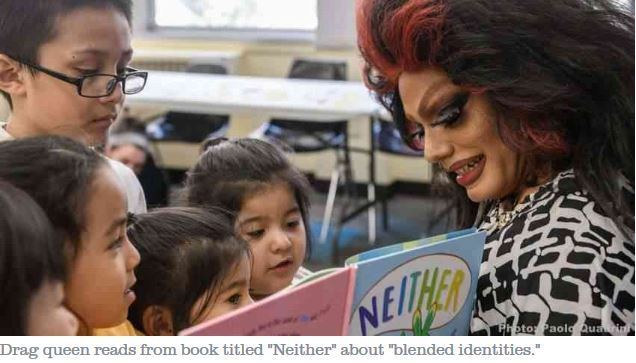 In 2020 America has become a land of perversion where some parents willingly allow their children to be exposed to the most scandalous of adult mentors — drag queens.

Local library systems all over America are sponsoring it.

When libraries say NO, politicians step in.

Many Americans keep waiting for their elected representatives to step in and do something.

One Missouri lawmaker has grown disgusted of this movement and has plans to put a stop to it in his home state.

A Republican lawmaker in Missouri has introduced a bill targeting drag queen story hour events at public libraries that would set up parental review boards to approve events and penalize librarians with potential fines and jail time for violations.

Baker said Thursday the proposed bill is not aimed at censoring books but is a response to drag queen story hours that have been held at libraries in some of the state’s larger cities, including St. Louis, Kansas City and St. Joseph.

“They’ve had these drag queen story hours, and that’s something that I take objection to and I think a lot of parents do,” Baker said. “That’s where in a public space, our kids could be exposed to something that’s age-inappropriate. That’s what I’m trying to tackle.”

Under the proposed bill, librarians who do not comply with the decisions of the parental review boards would be guilty of a misdemeanor, which carries a $500 fine and up to a year in prison.

Baker’s constituency of Neosho has never hosted a drag queen event at its public libraries, but their popularity in large cities like St. Louis, where an event attracted 500 people in September, has sparked indignation from conservatives across the state.

Missouri is my home state and Neosho, Baker’s district, is actually less than an hour from my home.

We don’t have much support for Drag Queen perversion in Southwest Missouri.

This is very much part of the Bible Belt.

If one of those Drag Queens were to show up at one of our small town libraries, they might honestly be in danger.

I’m not saying that is right but it is reality in The Ozarks.

So do we have enough support in our legislature to counteract liberal cesspools like St. Louis and Kansas City?

Time will tell, but something must be done.

How is any of this perversion OK for children of Missouri or any other state?

America is falling under the spell of an agenda that has been gaining momentum for years.

Liberals intend to turn this country into a modern day example of Sodom and Gomorrah.

For those who have Christian beliefs you know what that means.

If not, please explain to me how grown men in dresses flashing their crotches at your children is educational.

Please notice that these Drag Queens are growing more and more bold as time goes on.

Before long they will be arousing & pleasing themselves in front of our children as the adults in attendance continue to applaud.

What does that have to do with educating our kids?

What a sick agenda the liberals continue to push.

We must push back.