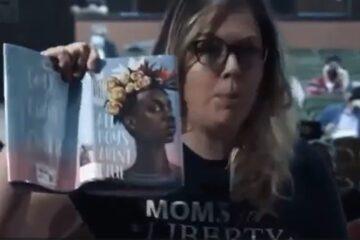 Parents across the US are standing up and calling out their representatives on school boards for their lawlessness, including subjugating children to sexually explicit material, even queer, sodomite material. One mother recently called out the North Penn School Board about a book found in Oak Park Elementary School library that was not only explicit but was about boys sodomizing boys.

Vicki Flannery of North Wales gave a similar warning before reading excerpts from “All Boys Aren’t Blue,” a book she claimed “up until this week, resided in the Oak Park Elementary library. This book was removed because of one of our parents.”

Flannery then read excerpts from that book describing sex acts, before taking aim at the board.

“Do any of you, any of you, find this book that depicts a sexual encounter and rape acceptable for any minor, regardless of gender or sexual orientation? Because I do not find this at all acceptable,” she said.

“A child is a child, and if you see this as acceptable, you belong on a national registry, and not a school board,” Flannery said.

Flannery, who is a Chapter Chair for Moms for Liberty, read small portions of the book to the school board and though it was explicit, there was far worse to come, which she refrained from reading.

Watch her speech before the school board in which she declared, “Do any of you find this book that depicts this sexual encounter (sodomy) and rape acceptable for any minor regardless of gender or sexual orientation? Because I do not find this acceptable. A child is a child and if you see this as acceptable, you belong on a national registry, not a school board.”

WARNING: This is not for little ears to hear. In fact, I believe it really isn’t for our ears but we must comprehend what these pushing the sodomite agenda mean to do and put a stop to it.

That’s not the only book that was brought up by a parent.

“Do you feel uncomfortable as an adult when you hear these words? How do you think this makes your child feel? My child can go to one of the libraries in this area and pick it up. I’m really tired of my stomach, thinking I can, “said parent Carrie Rocks.

At a long school board meeting at North Penn High School on Thursday night, Rocks and several parents read a board excerpt from a book they claimed to have recently found at a school in the district. This is an excerpt that prompted a content warning for the District NPTV channel.

While she was speaking, Rocks introduced herself as the mother of four Upper Gwinneds and posted a magnified photo of the page of the graphic novel Genderqueer, which deals with gender identity, claiming to be a “high school student.” She showed a page depicting sexual activity and asked the board when she read an excerpt containing words never said before at a school board meeting.

“Who made the decision to make this OK? I know the fact that the list in this book had to come across one of your desks to approve. Is it your intention to care for your children? Who made it your job to steal their innocence? “She said.

“Just because we think we’re only looking at six months doesn’t mean we don’t know what’s going on. That’s the constant barrage of your terrible policy and us. It was the mismanagement of the school and it drove us to a turning point. You are now Satan’s pawn for me. You all hate it, “Rocks said.

That same book was recently discovered to be in Keller ISD School in Texas.

This would have been considered contributing to the deliquency of a minor when I was younger. Now, parents just want these criminals on a national registry? No way, they have shown they are irresponsible with children. Jesus had a proper dealing with such people who caused little ones to stumble and it involved the sea and a milestone.

This comes as Hazard High School in Hazard, Kentucky engaged in this sexual, criminal activity between staff and student. Seriously, it’s like the culture has turned into a sexually charged pagan culture right under our noses. What’s even worse than what you see in the following images is the fact that the principal leading up this “man pageant” is also the mayor of Perry County City.

Amongst the many disconcerting pictures posted online, the most eyebrow-raising images showcased students dancing inappropriately in front of principal Donald Mobelini.

The Hazard High School principal was seen partaking in the event which transpired before him.

I can’t believe that some dads in the community have not given some of these people a beatdown, and I mean a real, manly fist pounding and then charged them for breaking the law in the way they have done with their own offspring. What has become of our men – weak, sissified, pansies calling themselves men?