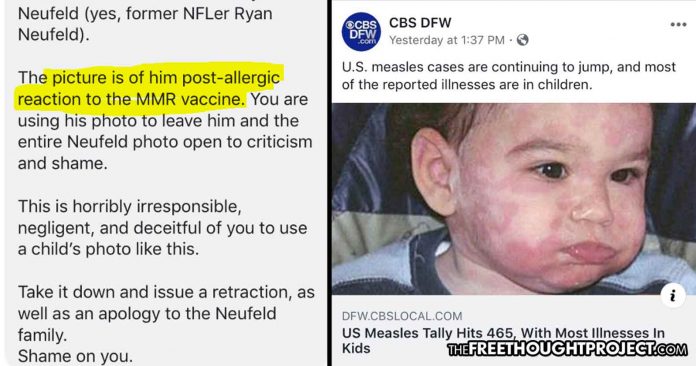 For months now, the Free Thought Project has been reporting on the hype and utter hysteria being pushed by the government and the media alike in regards to the 2019 measles situation. It started in January as mainstream media and social media giants began begging for the government to silence those who advocate for vaccine safety and it came to a head on Tuesday as New York began force vaccinating citizens and charging those who resisted it with a crime.

Highlighting the nonsensical reaction by the mainstream to the non-epidemic of measles in the United States, a CBS affiliate out of Texas ran a story with an image of child—claiming that child had the measles. In reality, however, the child featured in their image was injured from the vaccines meant to prevent measles.

Dawn Neufeld caught the media company using the image of her son and was furious.

“So @cbsdfw decided to use my kid as the poster child for the measles outbreak. We did not grant permission of any kind for its use. But the irony… Will doesn’t have measles in this picture; this is the reaction he had to taking the ‘safe’ MMR shot. We’re not happy about this… at all,” she wrote on Facebook Tuesday.

You fucked up @CBSDFW – this is my kid you used in your story without my permission. He does not have the measles. This was his reaction to the MMR shot. Take it down. Now. Issue a retraction. It’s much easier than having to litigate a defamation case. I’ll wait. pic.twitter.com/ZJA7XYirqT

Neufeld is an outspoken advocate for safe vaccines. Despite attempts to smear her as an “antivaxxer,” Neufeld has merely advocated for safe vaccines and notes that she still vaccinates her children.Because of Neufeld’s large social media following, CBS was inundated with angry comments on how “deceitful” and “negligent” the decision to use her son’s photo was—especially considering the fact that she blames vaccines for her son’s autism.https://twitter.com/DawnNeufeld/status/235423231723593728?ref_src=twsrc%5Etfw%7Ctwcamp%5Etweetembed%7Ctwterm%5E235423231723593728&ref_url=https%3A%2F%2Fthefreethoughtproject.com%2Fmainstream-media-falsely-used-image-measles%2FThe image of her son was posted to the news website with the caption, claiming “a baby infected by measles sits on his mother’s lap.” But that baby did not have measles and was instead covered in red whelps due to an adverse reaction to the very vaccine given to prevent measles.https://twitter.com/AlleyDalley/status/1115671320853790725?ref_src=twsrc%5Etfw%7Ctwcamp%5Etweetembed%7Ctwterm%5E1115671320853790725&ref_url=https%3A%2F%2Fthefreethoughtproject.com%2Fmainstream-media-falsely-used-image-measles%2FOnly after receiving threats of a lawsuit and an onslaught of negative comments and demands for them to take it down did CBS finally remove the image and issue a retraction.

“CORRECTION: An earlier version of this story showed a file photograph of a child who had an adverse reaction to the MMR vaccine. Due to an editing error, the child was misidentified in the caption as having measles. CBSDFW apologizes for the error,” the media outlet wrote on the article.

This incident illustrates the deceptive spin used by mainstream media to sell fear over the measles non-epidemic. An image of a child was used to incite fear over a measles outbreak and push the very vaccine which injured the child.

This fear and hysteria is now manifesting into an actual usurpation of our right to informed consent and the lapdog media is reporting it without question. And as the use of this image shows, while they unquestioningly report on the fact that Americans are being force vaccinated against their will, they’re doing so deceptively.

Even if it was an honest mistake, the case is made to show the lack of credibility these institutions have when calling for the silencing of those who do nothing other than question the safety of vaccines.

As Amazon purges books and films on vaccine information and as politicians literally beg for pro-safe vaccine folks to be silenced, examples like this prove that those who wish to control the flow of information and take away your right to ask questions, are not always right—a telling notion indeed.