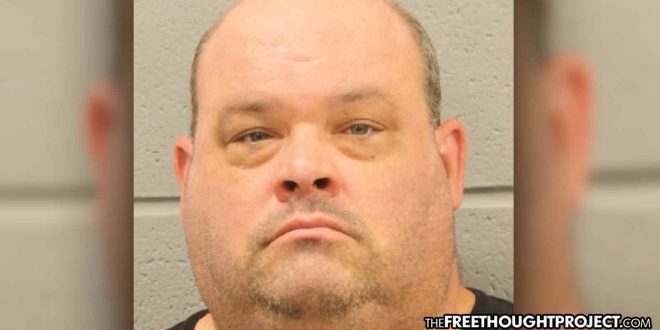 Houston, TX — As frequent readers of the Free Thought Project know, police sexual misconduct is a serious problem in the land of the free. Second only to complaints of brutality, sexual assaults among the ranks of cops is disgustingly uncommon. As the following case illustrates, many of these sexual assaults happen while the predators are on duty and often involve children.

A 23-year veteran deputy from the Harris County Sheriff’s Office was arrested on Tuesday for allegedly sexually assaulting a young mother in front of her 7-year-old daughter. Deputy Kenneth Wayne Reed, 45, of Montgomery, who has worked for the sheriff since 1997, faces a criminal felony charge of sexual assault.

The incident is alleged to have happened in March yet Reed remains employed. After the alleged assault took place, Reed was put on desk duty but could face termination in the near future.

According to the Houston Chronicle the incident unfolded as follows:

A uniformed Reed approached the woman in the 15700 block of Bammel Village Drive and struck up a conversation, according a statement from the sheriff’s office. He told her to put her daughter into her truck, her lawyer said. She said he then called her over to his patrol car, parked a short distance away, and made lewd comments about her body. He then sexually assaulted the woman with his hands, according to the sheriff’s office. Her lawyer said the woman’s daughter used a pad of paper in the car to write a note to her mother, which she held to the window.

Lewis said the girl’s note said something along the lines of, Mommy why is he touching you like that?

The deputy also called himself from the woman’s phone, Lewis said. Later that day, after she left the area, the deputy used the woman’s cell number to send her a lewd photograph and a sexually explicit video of himself, her lawyer said.

After the initial assault, the woman told investigators that she was scared to report it because the man who had just raped her could be the one tasked with investigating it. She got over the fear, however, and did report it, turning in overwhelming evidence in her case.

According to investigators, police verified the photograph on the woman’s phone and gained permission to question her daughter. Reed also programmed in his personal cellphone number under “Officer Kenny Reed” into the woman’s phone.

The woman also submitted to a rape test kit and her daughter’s note was turned in as evidence as well. According to the Chronicle, the sheriff’s sexual assault unit concluded its investigation and handed the case to District Attorney’s Office on April 28. However, he was not charged until nearly three months later.

According to prosecutors, Reed’s attorney attempted to make a plea deal prior to being charged, saying he would plead guilty to a misdemeanor charge of official oppression in exchange for two years’ probation.

The evidence was apparently so overwhelming, however, that the DA is pursuing a charge of felony sexual assault, which carries a sentence of 20 years.

Since Reed was on duty at the time of the alleged assault, the woman is also filing a civil lawsuit against the department, claiming that Reed engaged in an Fourth Amendment violation of the woman’s privacy.

Sadly, as TFTP reports on a regular basis, this woman’s case is anything but isolated. What’s more, despite the massive number of officers accused, charged, and convicted of sexual misconduct, very few spend time behind bars. Many of the officers even admit to the conduct but beat the charges based on ridiculous loopholes.

In a sample of 158 police officers who’ve been charged with sexual assault, sexual battery, or unlawful sexual contact with somebody under their control, at least 26 have been acquitted or had charges dropped based on the consent defense, according to a Buzzfeed review of a Buffalo News database of more than 700 law enforcement officers accused of sexual misconduct.

These numbers are indeed startling.

“Cultural shifts happen, but what we need to see is a policy shift,” said Terra Burns, an advocate in Alaska who has worked to expand police sexual assault laws. “There’s a long entrenched history of institutionalized rape culture that has to change.”

Indeed, one need only browse through our archives to see the brutal reality that is police sexual misconduct. Arguably, the reason it is so pervasive is the fact that they can get away with it with little to no consequences.

Unfortunately, while the actual laws written in the United States against rape appear harsh, at first glance, in reality the cops, the prosecutors, the judges, and eventually juries go soft on sexual predators, especially predators who wear a badge.