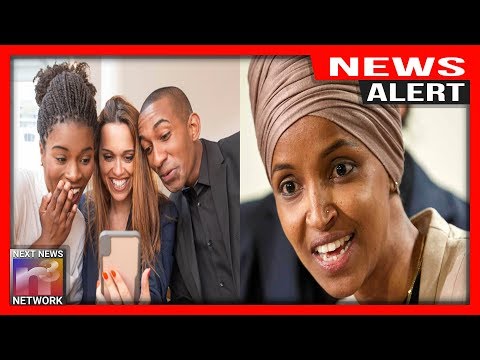 See if you can watch Ilhan Omar’s comments below without bursting into laughter.

This woman’s hypocrisy knows no bounds.

I’m starting to think that maybe her hijab is screwed on too tight.

There is something very wrong with this woman.

The irony of Rep. Ilhan Omar saying America is losing the moral high ground is pretty huge in light of the revelation that Omar has been accused of being a homewrecker in divorce documents filed this week.

Omar claims the U.S. needs the United Nations to come in to take care of the refugees who are coming to our border. Aaaah, no thank you! The US, a sovereign nation, shouldn’t bring in the UN for any reason. This is the globalist agenda and America is thankfully moving away from the globalist mantra of past administrations…

Rep. Ilhan Omar (D-MN) says the United Nations must be brought in to handle the immigration crisis on America’s southern border Omar, who was accused this week of having an affair with a married man, lectured the audience about the “moral high ground”

Rep. Ilhan Omar (D-MN) says the *United Nations* must be brought in to handle the immigration crisis on America's southern border

Omar, who was accused this week of having an affair with a married man, lectured the audience about the "moral high ground" pic.twitter.com/1wxtgw7I9x

Omar is going with the pivot from open borders advocates to turn the illegal aliens into “refugees” so they can get asylum in the US. They just need to prove “credible fear” and they’re given asylum. The definition of credible fear has become broader and broader. Is anyone surprised?

The United Nations gets BILLIONS from the U.S. every year for refugee resettlement. The UNHCR has built itself a nice cash cow that’s been able to provide SIX-FIGURE incomes. The more refugees they flood your towns with, the more money they make. So it goes without saying that the UN will strongly speak out when their tax dollar lifeline is threatened.

UNHCR’s biennial programme budget presents the consolidated budgetary requirements based on a global needs assessment of people of concern. This Global Appeal presents the proposed budgets for the 2018-2019 biennium —$7.508 billion and $7.352 billion for 2018 and 2019 respectively—based on needs assessed in the first quarter of 2017, as well as a summary of the current budget for 2017 ($7.963 billion, as at September). The budget for 2019 is based on estimations and will be updated in the first quarter of 2018. A revised budget for 2019 will be presented to the Executive Committee for approval at its 69th session in October 2018.

Do you ever get the impression that this woman says and does stupid things, just to keep the focus off of herself?

Or is she honestly this clueless?

It’s going to take a miracle for her to win reelection in 2020.

Oh wait… this just in…

Evidently Allah has dumped thousands of Somalis into her district in Minnesota.