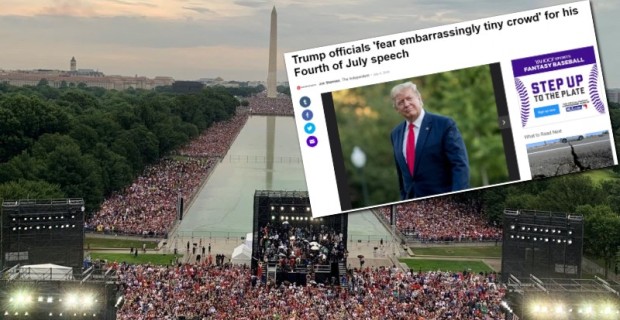 The media ran headlines right up to the day of President Trump’s July 4 speech predicting only a “tiny crowd” would show up. How spectacularly wrong they were.

An Independent article titled ‘Trump officials ‘fear embarrassingly tiny crowd’ for his Fourth of July speech’ was typical of the coverage. 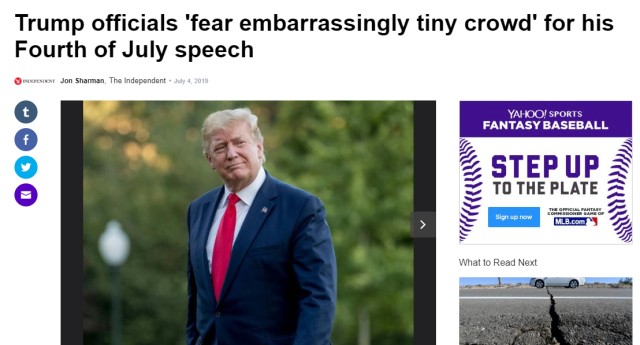 In reality, photos from the event show crowds stretching the full length of the national mall.

According to the media, this is “tiny”.

Yes! There are so many Trump Supporters that LOVE their country & the Make America Great Again Agenda! This photo makes me want to cry — so happy & proud!

The view looking out into the crowd from the Lincoln Memorial. No word yet on if weather will affect the planned flyovers during/after President Trump’s speech. #SaluteToAmerica pic.twitter.com/GDTVhOET7c

The webcam at the National Mall was abruptly shut down without notice and has been removed from the http://whitehouse.gov site. Presumably to stop viewers from seeing the lack of attendees at the #TrumpParade. We are about to relive Trump’s inauguration all over again,” claimed one leftist on Twitter.

He was presumably unaware of the fact that it’s silly to judge the size of a crowd hours before an event even starts.

Leftists are all over Twitter claiming the huge crowd images were “photoshopped”. Presumably, renowned Trump-loving network CNN was busy photoshopping them.

Leftists everywhere claiming huge crowds at July 4 parade were "photoshopped". Here's one from CNN, hardly a fan of Trump.

The sheer level of self-delusion you engage in is beyond belief.#TrumpParadeFailhttps://t.co/D00XcyBquA pic.twitter.com/YYAAm5cu4S

In fact the only only “tiny” crowd was the one that showed up with the Trump baby balloon.

That was really tiny.