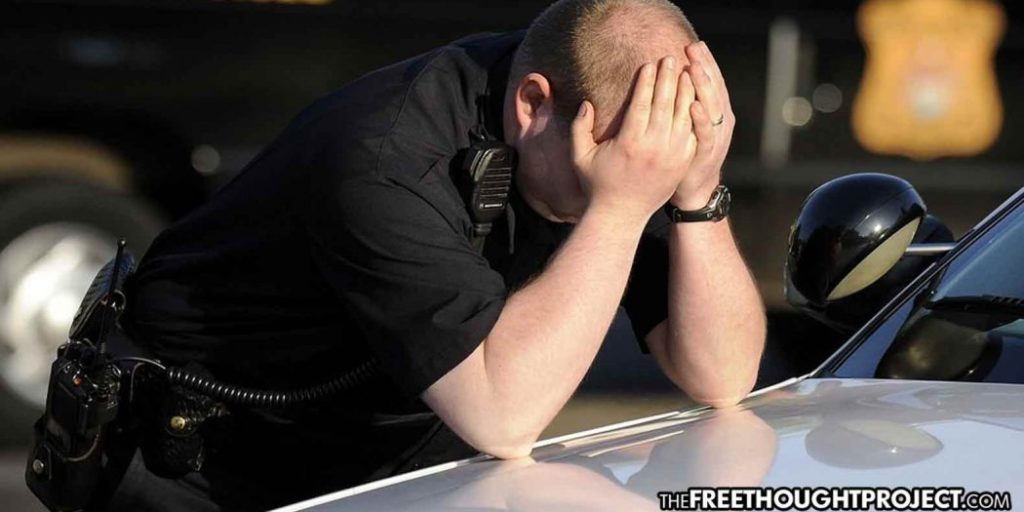 In 2019, according to the Officer Down Memorial Page, 47 police officers were shot, 7 killed in a vehicular assault, and three died from assault. Another 77 cops died as a result of car crashes, heart attacks, and illnesses. Absent from the database of fallen officers, however, are the 228 cops who ended their own watch. This number is a giant leap from the year before and the fourth consecutive year that it’s risen.

As the number of officers killed in the line of duty decreased by 20%, the number of cops taking their own lives has increased 35%. The website Blue H.E.L.P. (Honor. Educate. Lead. Prevent.) has already recorded five officer suicides in 2020.

The mainstream media often portrays the unfortunate random killing of police officers as analogous to a larger “war on cops.” The reality is that there is a concerted public relations effort underway, on the part of law enforcement, with the intention of stemming the growing public calls for more oversight and accountability.

If law enforcement were genuine about wanting to save the lives of cops, they would begin by attempting to put focus on the out of control epidemic of police suicides, which dwarfs the number of cops fatally shot the line of duty. Cops are killing themselves at a rate 4 times higher than they are dying in the line of duty and this subject seems entirely taboo.

Over the past three decades, the number of on-duty police killings has decreased substantially. Instead of attempting to fix the glaring problems in policing, law enforcement has invested itself in attempting to distract and divide the public. With the help of mainstream media, they attempt to portray themselves as victims of a rabid and out of control anti-police campaign which is violently and systematically targeting cops. But this is simply not true.

If people really care about cops, then it’s incumbent upon them to focus on the true threats to officers’ lives and not just buy into the spin machine.

The public must realize the dire situation, and extreme scope of the mental health epidemic currently facing law enforcement. There’s an extremely high rate of suicide, a domestic violence crisis and much higher rates of addiction in policing than the general public. It’s clear that the mental health issues affecting law enforcement should be a top priority if we hope to stem the number of citizens and cops being killed by police in America.

In an interview with The Free Thought Project, former LAPD officer Alex Salazar pointed out why many of his friends ended their own lives:

People are tired of being killed by these cops. They operate with a gang-like mentality similar to the military, in that they are pawns in a larger game, but perceive themselves as warriors for a righteous cause. Cops often turn to suicide after they lose control of their personal lives. They are taught to be control freaks and to be always be in control and it often ends in tragedy.

When I was a LAPD officer I had at least 6 partners and supervisors included who “ate” their guns. This police propaganda crap is occurring because they’re desperate and cops backs are up against the wall. They will resort to ANY tactic or issue and use it to inflate the situation. I perceive in the not so distant future some of these cowboy “John Wayne” types will instigate a fear driven attack against activists.

We have seen this fear driven attack play out many times over the years.

This isn’t about ‘us vs. them,’ or attacking police; it’s about the necessity of purging a critical sickness from U.S. policing in an effort make the streets a safer place for citizens and police alike.

We need to start looking at this increasing rate of officer suicides and realize the underlying problems attributing to them. If we can begin to correct those problems, the cops shooting citizens rate may start to fall too.

According to other experts in the field, cumulative exposure to trauma, horrific accidents and shootings can lead to mental health struggles that too often go untreated. A report by Blue H.E.L.P. reveals the rate of PTSD and depression for police and firefighters is five times higher than the civilian population.

A report commissioned by the Ruderman Family Foundation showed that officers’ highest risk of death is by suicide with most deaths in California and Texas.

Critics believe the lack of resources for mental health also adds to lives being lost. Mental health experts say the barrier that keeps officers from seeking help are shame, fear of being off the job and the stigma behind it. Perhaps if cops were better trained at dealing with their own mental health issues, they’d be less likely to kill those with similar problems.

Matt Agorist is an honorably discharged veteran of the USMC and former intelligence operator directly tasked by the NSA. This prior experience gives him unique insight into the world of government corruption and the American police state. Agorist has been an independent journalist for over a decade and has been featured on mainstream networks around the world. Agorist is also the Editor at Large at the Free Thought Project, where this article first appeared. Follow @MattAgorist on Twitter, Steemit, and now on Minds.