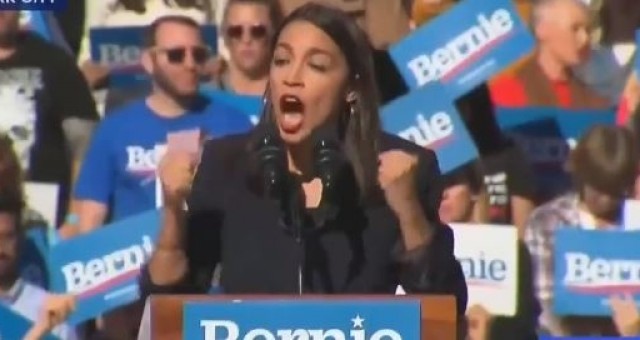 And not only because he is a fellow Democrat Socialist, whatever that means, but because he, like she, recognizes that illegal aliens work harder than Americans.

“I’m proud to say that the only reason I had any hope in launching a long-shot campaign for Congress is because Bernie Sanders proved that you can run a grassroots campaign in an America where we thought it was impossible,” she said.

Ocasio-Cortez: "We need an, uh, uh, a United States that really, truly, and authentically, is operated, owned, and decided by … all people in the United States of America"

AOC is essentially suggesting that property should be public property

That is a core belief of communism pic.twitter.com/maugsY7LqD

“Maybe to others, he is a brother. But he is my Tio Bernie Sanders,” she said to the cheers of the adoring crowd.

“Last year, last February, I was working as a waitress in downtown Manhattan. I worked shoulder to shoulder with undocumented workers who often worked harder and the hardest for the least amount of money,” she said.

“I didn’t have health care. I wasn’t being paid a living wage. And I didn’t think I deserved any of those things.

“Because that is the script that we tell working people here and all over this country: Your inherent worth and value as a human being is dependent on an income that another person decided to underpay us.

“But what we are here to do is to turn around the very basic lie. It wasn’t until I heard of a man by the name of Bernie Sanders that I began to question, assert, and recognize my inherent value as a human being that deserves health care, housing, education, and a living wage,” she said.

But it gets better. She said to the crowd that, essentially, we need to give the government more control of our lives so we could be more free.

“We need to build a mass movement in America centered on working-class, the poor, the middle class,” Rep. Ocasio-Cortez said.

“One that is rooted in principles of cooperation, that is participatory, that combats not only racism but misogyny, anti-queer discrimination, we have to have actively center those principles to drive us forward because the future and our future is in public systems, and it’s publicly owned systems.

“Because we need to take power over our lives again. I don’t know about you, but I don’t want Mark Zuckerberg making decisions over my life.

“I don’t know about you, but the Waltons have already been making decisions over our lives and what we got was nothing.”

“We need a uh eh uh United States that really, truly, authentically is operated, owned and decided by working, and all people, in the United States of America,” she said.