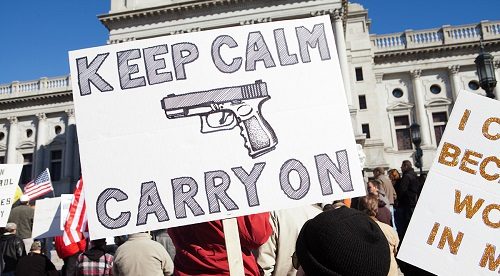 At least one major mainstream media outlet, the LA Times, has been reportedly “angry” that gun sales have shot up because of the tyrannical takeover of government in response to the COVID-19 panic they induced. Apparently, fear can have effects on the public that the MSM and government do no want – more self-reliance.

According to a report by Big League Politics, the LA Times is “throwing a fit” that other humans are buying weapons to defend themselves against the obvious tyranny. Remember, this follows their theme. The more dependent you are on them and the system they set up against you, the easier you will be to control. Taking your self-defense into your own hands was never a part of their plans. In fact, the LA Times editorial board described the increase in gun sales as follows:

Since the start of the pandemic, Americans are buying more guns. The FBI says it conducted a record 3.7 million background checks for would-be gun buyers, a loose proxy for firearm sales, in March as lockdown orders spread across the nation. In April the checks dropped to 2.9 million but rebounded to 3.1 million in May. The monthly average for 2019 — itself a record year for background checks — was 2.4 million. So even as we get fresh studies connecting possession of firearms with increased risk of gun violence, accidental shootings (usually by children) and suicides, we are adding more firearms to the nation’s already numbingly large privately owned arsenal of some 300 million guns (no reliable count is available) owned by about a third of the population. -LA Times

The board goes on to say that this amount of gun sales can be considered “madness.”

Breitbart News reported Small Arms Analytics & Forecasting’s chief economist Jurgen Brauer noted “the ratio of handguns to long-gun sold…[set] a new record of 1.94” in April. That ratio “[broke] the previous high of 1.84 set just one month ago.” The uptick in handgun purchases are indicative of a populace feeling like an extra layer of self-defense in warranted.