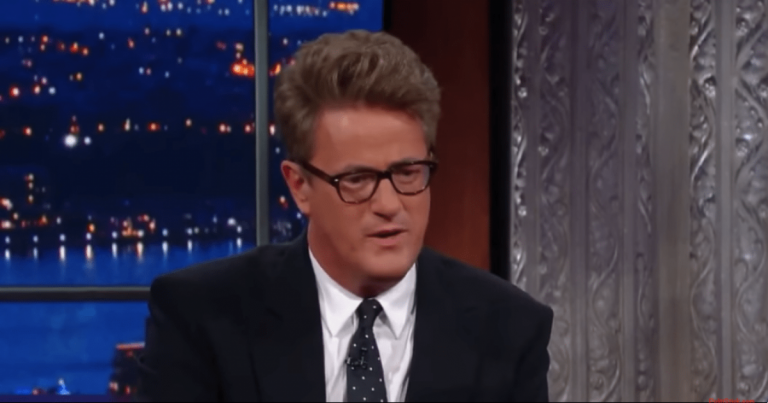 On Saturday, news broke that financier Jeffrey Epstein died by apparent suicide in his Manhattan jail, despite being on suicide watch one day after authorities released some 2,000 pages of highly incriminating documents.  This prompted MSNBC propagandist Joe Scarborough to turn into a full-blown conspiracy theorist, laying the blame for the suicide on the Russians.

You heard that right.  The Russians.

“A guy who had information that would have destroyed rich and powerful men’s lives ends up dead in his jail cell. How predictably…Russian,” he said on Twitter.

A guy who had information that would have destroyed rich and powerful men’s lives ends up dead in his jail cell. How predictably…Russian.

Trending: California Teen Kidnapped and Raped by 3 Latinos, Uses Snapchat to Save Herself

He reportedly tried to kill himself two weeks ago. And is allowed to finish the job now? Bullshit.

Powerful Democratic and Republican figures breathing a huge sigh of relief—as well as a Harvard professor or two.

Reaction to this insanity was predictable.  One person wanted to know if the Russians who did it were in the room with Scarborough…

Are the Russians who did this in the room with you now?

I agree it is suspicious but Russia? Why would Russia want to murder him?

Well, according to Scarborough’s fellow conspiracy theorists, it was all done on Trump’s orders.

Trump’s Russian friend cleaning up for him. Dershowitz must be creaming his pants this morning. #TrumpCriminalEnterprise

Or just your garden-variety idiot.  Who just happens to have a slot at MSNBC where he can spew his hate and propaganda.

You are proof that to have a cable news show on MSNBC, you just have to be shameless and corrupt.

Andrew Kaczynski called Scarborough out for his reckless and idiotic tweet.

reckless speculation like this from someone with a platform and voice as large as yours is as irresponsible as it gets.

But, hey, Scarborough works for MSNBC, so it’s all good, right?

Then there’s this hot take:

Billionaire pedophile Epstein died, and this celebrity "journalist" immediately blames Russia, without a scintilla of evidence

In the new cold war TV "journos" blame foreign bogeymen for anything and don't need a shred of proof, because facts don't matterhttps://t.co/CsmAjBkI8A

Delete your account, and find a new profession. You really suck ar your current one.

Just In: FBI Releases Crucial Information On Page And Papadopoulos That Could Change Everything
January 19th, 2020 Right Wing Tribune

Trump 2020 Just Some People Doing "Something" Mug with Color Inside

I Plead the 2nd Snapback Hat