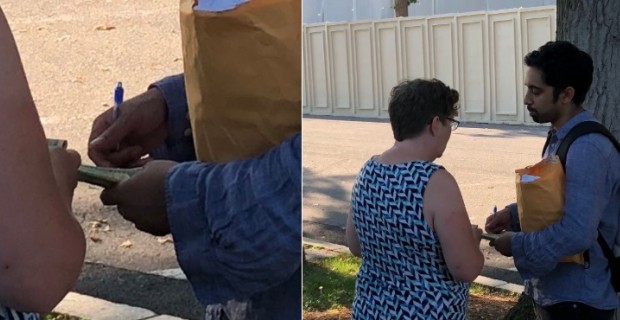 Three doctors said they personally witnessed protesters being paid off before the Brett Kavanaugh confirmation hearing, which was disrupted by unruly demonstrators.

A total of 70 people were arrested during the hearing after many of them began screeching incoherently in an effort to derail the event.

Activist Adam Schindler interviewed three doctors from Texas who suggested that the entire protest was far from organic.

“One thing was there were people who had come along… who had a bag of money, and people would hand them a piece of paper, and then they would give them money. So we know money was exchanged for some of the people to be here, just to protest,” said Dr. Tom Schlueter.

“The most telling thing was listening to them giving names and addresses, so when they were arrested, they were keeping a record and celebrating who got arrested, without any regard for any open discussion or even the possibility of being convinced of anything, it was just for the purpose of disruption and to have some kind of disruption of the process,” said Dr. Morton Purvis.

Schindler tweeted this image which he claims shows one of the protesters being paid.

A screenshot from the hearing shows the very same woman being arrested and led outside.

Senator Tom Tillis also said yesterday that Democrats’ sabotage of the hearing was planned in advance and had nothing to do with the claim that they were given 42,000 documents too late.

You’d think that with the Trump economy doing so well, these people would be able to earn a decent living without being forced to play the role of fake, astroturf protesters.