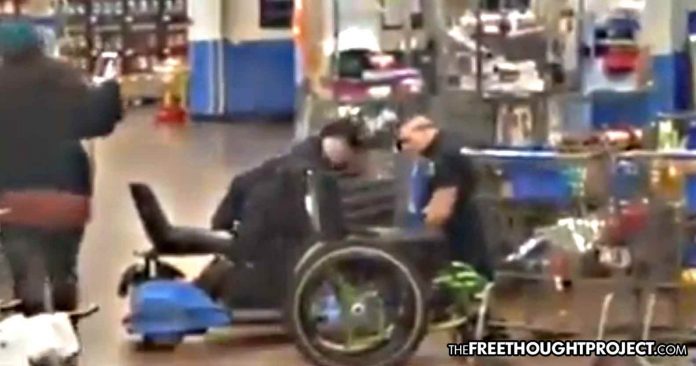 Muskogee, OK — An infuriating video was uploaded to social media this week showing multiple police officers attack a disabled veteran in a Walmart. The veteran was pulled from his wheelchair, thrown to the floor and pepper sprayed after asking for the store’s policy on showing identification to purchase alcohol.

“Instead of being greeted with the policy, I was greeted with six of Muskogee’s not so finest,” Williams said.

Police tell a different story and claim that Williams caused a disturbance after he was asked for his identification.

“He became hostile and created a disturbance, including cussing Wal-Mart employees,” Public Information Officer Anderson said. “Officers were called to the scene. He also refused to identify himself to officers while they were investigating the incident.”

When police arrived, instead of simply telling Williams to leave, they demanded he show them his identification or face arrest for obstruction.

Williams, having committed no crime simply refused to identify himself, but this assertion of his rights caused police to escalate the situation.

“I didn’t want to give up my ID, because I didn’t want to be in any kind of system for any reason, especially not for something this stupid,” Williams said. “They told me I had to present my ID because I was being charged with obstruction. I told them as politely as I could that I’m not stupid, that obstruction is a secondary charge.”

For refusing to identify himself, police then arrested Williams.

“He was told he was going to be placed under arrest for obstruction and that he was trespassing on Wal-Mart property,” Anderson said. “He was asked to leave Wal-Mart and to get into his wheelchair from the Wal-Mart motorized cart.”

According to police, Williams began resisting police and he’s accused of striking one of the officers. According to Williams, however, he wanted nothing other than to leave the store.

As the video shows, multiple cops surround the disabled veteran and begin prying the distressed man from his wheelchair. The video does not appear to show Williams striking an officer. It does, however, show him being thrown to the ground and scream in agony as he’s doused with pepper spray.

“He continued to resist officers until he was placed into handcuffs,” Anderson said. “EMS was called, and he was transported to Saint Francis Emergency Room for his claimed injuries.”

According to the Muskogee Phoenix, Williams said that the takedown, which involved officers placing Williams on the floor and straddling him, exacerbated existing neck and back injuries sustained during service in the Army. Williams was taken from Saint Francis’ Muskogee hospital to the Tulsa location, where he will be admitted for examination, he said.

“As of this moment, their actions directly caused me to lose use of my left leg,” Williams said. “They’re checking me in to see a neurosurgeon.”

The entire interaction, according to Williams was over the simple fact that this disabled veteran wanted to see why he was being denied a purchase.

Below is the disturbing video.

Sadly, veterans being abused by the government they put their lives on the line to defend is an all too common issue. One need only look through our archives to see the horrid abuses faced by those who fought for this country.