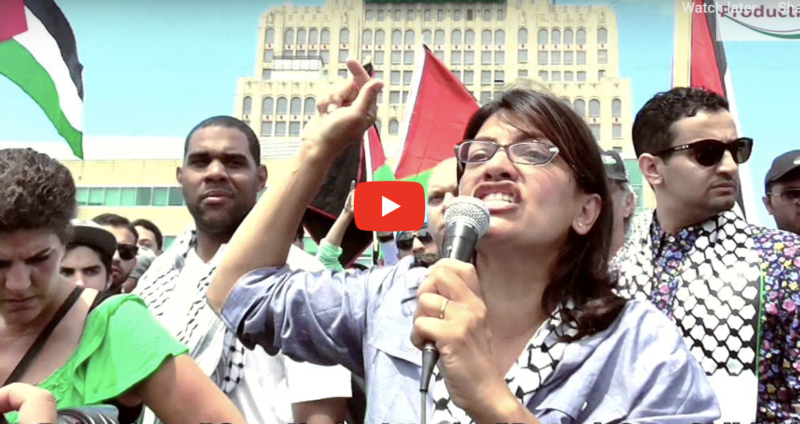 Muslims say “Bismillah al-Rahman al-Rahim” in an infinite variety of contexts. It starts every chapter of the Qur’an except the one that calls directly for war against Jews and Christians, so it isn’t precisely a “war cry.” But Tlaib’s speech is disturbing enough anyway. She praised Muhammad, who said “I have been made victorious with terror” and “I have been commanded to fight against people until they declare that there is no god but Allah and I am his messenger.” And it’s clear where her allegiances lie: she said “Muslim,” “Islam” and “Palestinian” several times, but never uttered the word “American.” This is the Democrat Party today.

NEWLY-ELECTED FOUL-MOUTHED MUSLIM CONGRESSWOMAN RASHIDA TLAIB (D-MI) GAVE A RADICAL SPEECH AND DECLARED THE ‘WAR CRY OF ALLAH’ AT A RECEPTION FOR TERROR-TIED CAIR (COUNCIL ON AMERICAN-ISLAMIC RELATIONS) ON THURSDAY.

Rashida Tlaib immediately declared victory for Allah after she walked up to the lectern to deliver her speech.

After greeting the crowd in Arabic, Rashida Tlaib said, “Bismillah al-Rahman al-Rahim,” which means, “In the name of Allah, the merciful, the compassionate.”

This very phrase begins every chapter in the Quran except one and is seen as a Muslim war cry.

In fact, this is the very same phrase Bowe Bergdahl’s father said in front of the White House in 2014 after Obama traded Taliban terrorists in exchange for traitor Bergdahl….

Rashida Tlaib spoke for 7 minutes, speaking in both English and Arabic and not once did she say the word “American.”

Tlaib did however, say the words “Muslim,” “Islam” and “Palestinian” several times. The only time she said “The United States” was when she trashed President Trump….