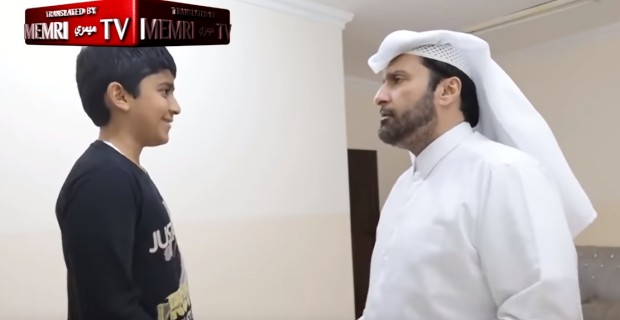 A Muslim sociologist uploaded an instructional video to YouTube on how to properly beat your wife by demonstrating the different techniques on a young boy.

The clip shows Abd Al-Aziz Al-Khazraj Al-Ansari showing how to beat your wife in an Islamically permissible fashion.

According to Al-Ansari, a man must sometimes beat his wife “out of love” so that “life can move on.”

Although emphasizing that the beating should be light and painless, Al-Ansari said it was necessary so the wife could feel her husband’s “masculinity and strength” as well as her own “femininity”.

While demonstrating the procedure by grabbing, shaking and slapping a boy who appeared to be his son, Al-Ansari said, “I told you not to leave the house! How many times do I have to tell you?”

Justifying the act, Al-Ansari said, “Some wives like domineering and authoritative husbands, by nature they like violent and powerful husbands.”

Although the original video appears to have been deleted, the YouTube channel that hosted it is still active.

Presumably, YouTube is fine with demonstrations of wife beating performed on children, but Alex Jones had to be completely terminated because ‘reasons’.

Meanwhile, Muslim country Brunei just passed a new law that allows gay people to be stoned to death. Progressives across the west took to the streets to denounce such vile homophobia.