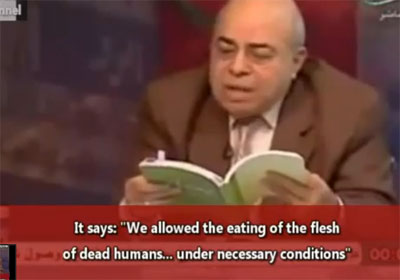 From the archives: November 13, 2013. Due to the age of this article, some links may be broken. A video that was hosted on YouTube has been removed.

TSE is an incurable fatal disease that affects the brain and nervous system of many animals, including humans. Autopsies of infected brain tissue show a myriad of tiny holes in the cortex, giving it a sponge-like appearance — hence spongiform. (See below)

The disorder causes impairment of brain and bodily functions, including memory changes, personality changes, and problems with movement (shaking, trembling) that worsen over time.

Like all TSEs, the bovine variant is transmitted via prions (a type of protein) instead of via bacteria or viruses. The prions come from the tissue of a TSE-infected cow which was ingested by another cow. The corporate meat industry actually mix cow tissue in the food that’s fed to cows. Yuck!

But there is another form of human TSE called Kuru that is caused by humans ingesting TSE-infected human tissue. In other words, Kuru is the result of cannibalism.

Kuru was first identified in 1961 among the Fore tribe in Papua New Guinea. Research suggested that the epidemic may have originated around 1900 from a single individual who lived on the edge of Fore territory and who is thought to have spontaneously developed some form of Creutzfeldt-Jakob Disease. From that infected individual, Kuru spread easily and rapidly in the Fore people due to their endocannibalistic funeral practices, in which relatives consumed the bodies of their dead, especially the brain tissue where prions are concentrated, to return the “life force” of the deceased to the hamlet. By the mid-1960s, Kuru was in decline among the Fore due to Australian colonial law forbidding cannibalism, as well as the efforts of local Christian missionaries. But cases continued to appear for several more decades because the mean incubation (asymptomatic) phase of the disease is 14 years after initial exposure, although cases were reported with latencies of 40 years or more. The clinical (symptomatic) phase of the disease lasts an average of 12 months, before the infected person dies.

The last sufferer in Papua New Guinea died in 2005. Little did the world know that Kuru would make its reappearance thousands of miles from Papua New Guinea — among Muslim “rebels” in civil war-torn Syria.

In April of this year, Time magazine obtained a video that had been smuggled out of Syria by a “rebel fighter.” Aryn Baker writes for Time magazine, May 12, 2013:

In the video a man who is believed to be a rebel commander named Khalid al-Hamad, who goes by the nom de guerre Abu Sakkar, bends over the government soldier, knife in hand. With his right hand he moves what appears to be the dead man’s heart onto a flat piece of wood or metal lying across the body. With his left hand he pulls what appears to be a lung across the open cavity in the man’s chest. According to two of Abu Sakkar’s fellow rebels, who said they were present at the scene, Abu Sakkar had cut the organs out of the man’s body. The man believed to be Abu Sakkar then works his knife through the flesh of the dead man’s torso before he stands to face the camera, holding an organ in each hand. “I swear we will eat from your hearts and livers, you dogs of Bashar,” he says, referring to supporters of Syrian President Bashar Assad. Off camera, a small crowd can be heard calling out “Allahu akbar” — God is great. Then the man raises one of the bloodied organs to his lips and starts to tear off a chunk with his teeth.

Two TIME reporters first saw the video in April in the presence of several of Abu Sakkar’s fighters and supporters, including his brother. They all said the video was authentic. We later obtained a copy. […] These 27 seconds of footage provide a glimpse at how brutal the Syrian war has become….

Walid Theodore Shoebat, a former member of the radical Muslim Brotherhood but now a truth-telling peace activist, writes in his blog that Kuru has been found in 8 to 20 people in war-torn Syria, and the only way it could have come about, doctors confirmed, is through cannibalism and the consumption of human brain,as first reported by Arabian news source Zaman al-Wasal and substantiated by Orient News Television.

Two of the infected were sent from Syria to a hospital in Ghazi Antab in Turkey for further examination, then transferred to another hospital in Germany. One of the two was confirmed to have eaten human flesh, and he eventually died.

Shoebat has written extensively on Islamic cannibalism, which can be found here, here, here, and here.

The asymptomatic incubation phase of Kuru is between 5 to 20 years following initial exposure, with the average being 12 years. But the Syrian civil war began in 2011. This suggests that the Kuru of the infected Syrian men would have been transmitted BEFORE the civil war.

Such is the Religion of Peace!

StMA is the Editor of Consortium of Defense Analysts.