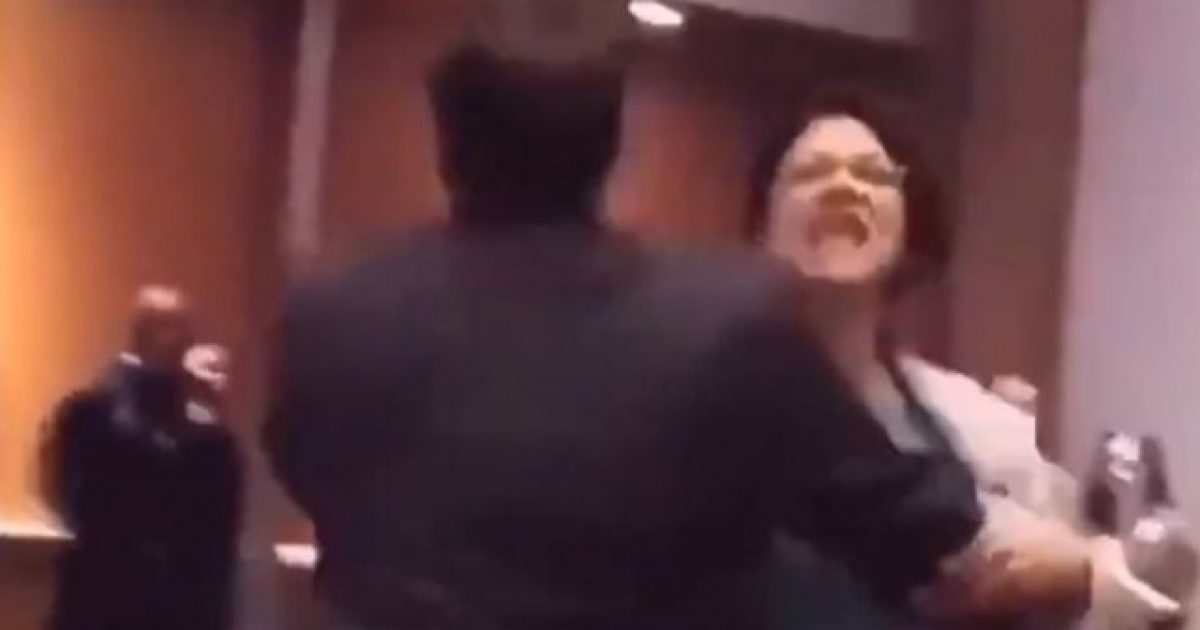 WOW! Video has surfaced of “Fraud Squad” member Rashida Tlaib being forcefully removed out of a Trump event where he was addressing business leaders in 2016.

In the short clip Tlaib is seen screaming and flailing around like some kind of crazed pyscho, which in reality she is.

The video was shared by David Harris Jr., a black supporter of the president:

Rashid getting kicked out of a @realDonaldTrump event! And she calls us crazy! Look at her! #isupport45 pic.twitter.com/sXebZQDqQZ

Let’s watch this one more time!

LMAO! She’s completely unhinged! Tlaib is heard looking into a camera and claiming that Trump supporters are the crazy ones… okay, whatever.

JonDougherty at The National Sentinel has more:

Later, Tlaib (D-Mich) was given a platform in the Detroit Free Press to justify her outburst, where she was allowed to level false accusations at the president-to-be and make out-of-context claims unchallenged:

Courteous behavior can’t be reserved for someone who labels hardworking Mexican immigrants who have come to pursue the American Dream as “rapists.” Social niceties are not in order for men who would turn away refugees fleeing for their lives based on their faith to have them suffer in camps. And complacency is not warranted for a presidential candidate who denigrates a mother and father who have lost their child in the ultimate sacrifice of military service.

I can’t describe the fear that gripped me when I rose in front of nearly 2,000 professionals at this tony, corporate setting. I watched as Trump supporters taunted the women who stood before me as they were aggressively and briskly led to the exits. I froze, feeling the anger around me that would make anyone tremble. Yet, I could only think of the unwavering love for my two sons to find the courage to do my own part.

Watching my 11-year old’s anxiety increase the more he hears from his friends about what Donald Trump said or wants to do if he is elected has been heartbreaking. So when I heard Trump was coming to Detroit to speak only a few miles from our home, I couldn’t say no when I was offered a ticket to attend his speech.

Yes, well, it was this ‘Mother-of-the-Year’ candidate, you recall, who resorted to the worst kind of profanity to proclaim, the day she was sworn in, that Democrats were “gonna impeach the motherf**ker” president:

Democrat Rashida Tlaib during her first day as a U.S. Congresswoman: “We’re going to go in and impeach the motherf**ker.” pic.twitter.com/hG538ZOQlb

After a week in which POTUS has been, once again, victimized by a fake news media which claimed a series of tweets he sent out to members of Congress who have routinely demonstrated anti-American tendencies were “racist,” the president quadrupled down on that theme Sunday.

Taking aim at Reps. Tlaib, Alexandria Ocasio-Cortez (D-NY), Ilhan Omar (D-Minn.), and Ayanna Pressley (D-Mass.), the president wrote, “I don’t believe the four Congresswomen are capable of loving our Country. They should apologize to America (and Israel) for the horrible (hateful) things they have said. They are destroying the Democrat Party, but are weak & insecure people who can never destroy our great Nation!”

POTUS is also making these four the faces of the Democrat Party heading into the 2020 election.

Democrats have leapt to the defense of their colleagues, seemingly taking the bait the president laid out for them.

In March, the House passed a watered-down resolution condemning Omar’s repeated “anti-Semitic” and “pernicious” comments, but did not directly name her.

“I think what they say, and what they’ve said, is a disgrace to them, to the Democrats and frankly to our country,” he said.