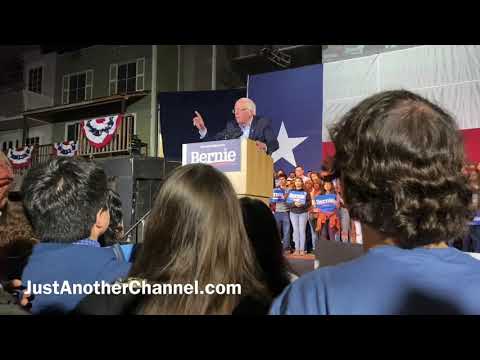 Bernie Sanders is one of the biggest hypocrites in congress.

On Saturday a woman decided to call him out, in San Antonio, and was forcefully removed for doing so.

Off to the the Gulag with her.

“Never trust a socialist with a summer house.” — Colin Quinn

For a socialist, Sen. Bernie Sanders is doing pretty darn well. He’s a millionaire, he’s got three houses (including a lakefront home with an acre of frontage), and he loves his private jets.

Oh, but don’t ever — ever — ask Bernie about his 1 Percent status.

On Saturday, a woman tried to do just that — and she got forcibly removed from a campaign event in San Antonio, Texas.

The woman — who was wearing a Trump shirt — shouted repeatedly at Sanders about his jet travel, even as he droned on about climate change (Sanders supports a policy being pushed by Rep. Alexandria Ocasio-Cortez called the “Green New Deal,” which would cost an estimated $93 trillion over 10 years).

Outside of the venue, Doss explained that she wanted to highlight Sanders’ hypocrisy on climate change.

When Bernie’s not at one of his three house or in first class, he’s flying in private jets.

He’s just another Democrat** that tells his supporters what they want to hear.

Bernie’s supporters are scary because Bernie is scary.

Is this really the type of man that is capable of leading America?

**Oh, and by the way, how is it that an Independent is the front runner for the Democrat nomination?

Democrats are so oblivious to the wants and needs of their own voters that they have to pick a communist for a nominee.

No wonder so many Democrats are jumping ship.