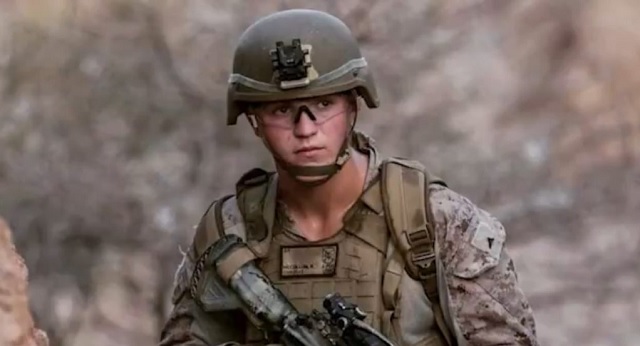 The Globalist American Empire is facing an unprecedented legitimacy crisis.

From National File, “Mother Of Fallen US Marine Rylee McCollum To Biden Voters, Democrats: ‘You Just Killed My Son'”:

Kathy McCollum, the mother of United States Marine Rylee McCollum, one of the 13 US service members killed in the tragic bombing in Kabul, Afghanistan called radio host Andrew Wilkow to express her feelings about her son’s death. “My son is gone, and I just want all you Democrats who cheated in the election, or who voted for [Biden] legitimately — you just killed my son.”

The mother of Rylee McCollum, a fallen US Marine who tragically died as a result of the bombing in Kabul, Afghanistan, condemned Joe Biden and Democrat voters over the death of her son on a radio show hosted by Andrew Wilkow. “My son was one of the Marines who died yesterday. 20 years and 6 months old, getting ready to come home from freakin Jordan to be with his wife to watch the birth of his son, and that feckless, dementia-ridden piece of crap just sent my son to die. I woke up at 4 o’clock this morning to Marines at my door, telling me my son was dead,” said McCollum.

“My son is gone, and I just want all you Democrats who cheated in the election, or who voted for [Biden] legitimately, you just killed my son…with a dementia-ridden piece of crap who doesn’t even know he’s in the White House, he still thinks he’s a Senator.”

“[Congresswoman Boebert] said ‘your son did not die in vain,’ but guess what? My son did die in vain. This was an unnecessary debacle that could have been handled properly. They had months and months to remove everyone from Afghanistan, and they chose not to, and so they sent freaking what? 6000 troops?” said McCollum. “My son was one of the ones who just got blown up in a freaking terrorist bomb yesterday.”

“My son was a genius child, an IQ of 156. He could’ve done anything he wanted to do in the military, and he chose to be a Marine sniper, and that was his choice. Instead of just, you know, being fast tracked, he chose this course. But I never thought in a million years that he would die for nothing,” continued McCollum. “For nothing, because a feckless, dementia-ridden piece of crap decided he wanted a photo op on September 11th — that’s what kills me. I wanted my son to represent our country, to fight for my country, but I never thought that a feckless piece of crap would send him to his death and smirk on television while he’s talking about people dying, with his nasty smirk. The dementia-ridden piece of crap needs to be removed from office. It never would have happened under Trump,” said McCollum.

“It is so disgusting that these people cannot even acknowledge the fact that they just killed my son for nothing. For an ill-managed debacle of a freaking withdrawal from a country that we had total control of. That’s what gets me,” McCollum said.

“For every Democrat who cheated or voted for Biden, that left my son in harm’s way, and allowed this dementia-ridden piece of crap, who is a treasonous man who just got in to office because he was running out of funds for his family — you did this to my son. Every Democrat that’s listening — you did this to my son to prop up a disgusting human being.”

The disdain the American people have for our occupiers is tremendous. The amount of censorship and fraud our overlords must execute every day to to try and keep it under wraps is tremendous.

Nonetheless, it’s bubbling just under the surface and getting ready to break out.

That’s why the regime is so desperate to label us all as “terrorists,” doesn’t trust their own enforcers to be armed and is spying on members of the military for signs of “extremism.”

Will they label Mrs. McCollum an “extremist” and “domestic terrorist” for going against the regime and censor her rant on social media for calling the election a fraud?

It wouldn’t surprise me at this point if they already have!