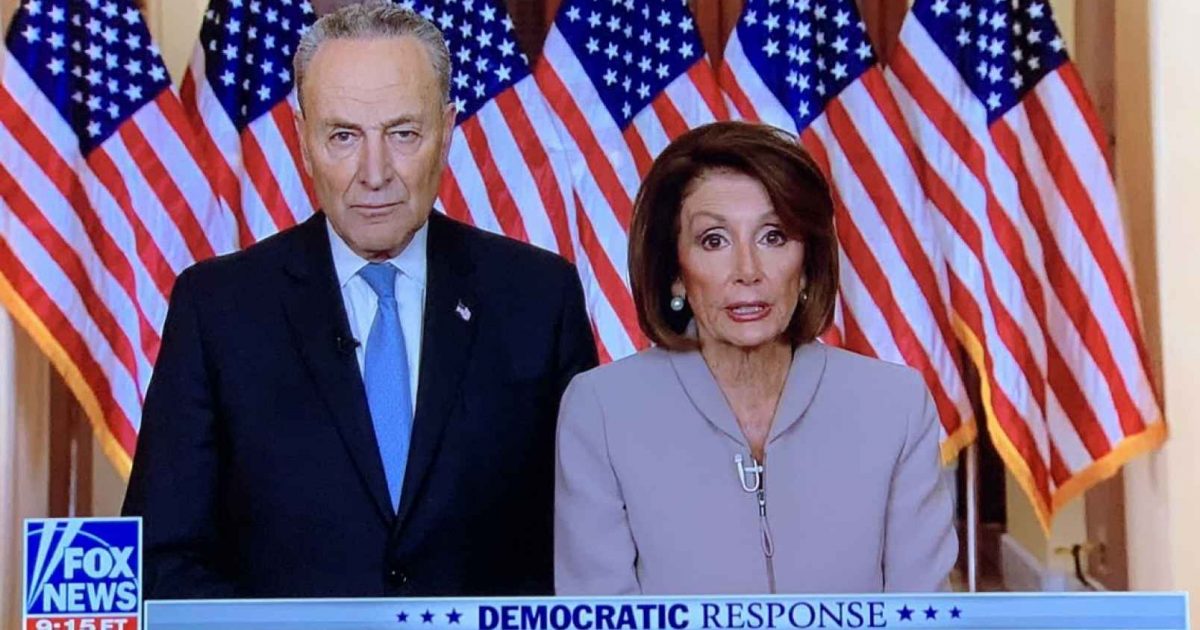 The Democrat leadership is old and confused.

Bernie Sanders has three talking points he returns to like a dog to its vomit. Joe Biden can hardly stop groping women long enough to finish a sentence. Chuck Schumer was last heard from in March. And Nancy Pelosi doesn’t understand much. But she tries. Bless her heart.

In this excerpt of a Recode interview, Speaker Pelosi tries to explain how the Russians stole the election. Or her brain.

Pelosi: No, for sure I thought Hillary would win. Yeah.

Recode leftist hack: Yes, and one of the things that happened was the intervention of foreign influence on the social media platforms. You’re from San Francisco, represent some of these companies.

RLH: Talk about how you think about that now, given … and we’ll get to the Mueller report and everything else, but how do you look at that when you look back on it, what you were thinking at the time and what you think happened?

Pelosi: Well, first of all, we were totally shocked that Hillary Clinton did not win. Now, we know that there were interventions that stood in the way of that, but, again, you take responsibility for your race and you always have to just be prepared for the unforeseen. Little did anybody know, the unforeseen would be Russian intervention into our election, a real disruption of the basis of our democracy.

How did the Russians intervene? Getting Nancy to explain is like getting a duck to play chess.

Pelosi: That’s what’s so frustrating, now, because we don’t see a commitment on the part of this administration to get to the bottom of it. But we are awaiting the Mueller report in that regard. But it did … But the Russian intervention did have an impact on the election.

But one of the highest officials in the country can cast doubt on the election without being able to even coherently spell out her conspiracy theory.

Pelosi: Well, I don’t know if there were any mistakes made. I think that President Obama, in his judgment, talked about not interfering into an election, which is what you shouldn’t be doing. We did try to get the Republicans to join us in taking a harder look at it, but they would not do that. But, again, I don’t know that anybody had a full grasp of the extent and the impact. The election happened. We found out it is the high-level, high-confidence consensus of all elements of the intelligence community that the Russians disrupted our election, and they have specific ways. We look forward to seeing the Mueller report to see more specifically what that is.

What does any of this mean?

Pelosi is still relying on the discredited “intelligence community” meme. The reality is more like a few Obama appointees working for CNN.

RLH: What are you doing yourself? There will be the Mueller report, but what do you see yourself as your duty to protect elections, going forward, especially on social media platforms? I want to get into the various social media companies.

Pelosi: Just a step before that, what we tried to do last year … and we didn’t have the majority. Now, this year, we will be able to do it. But last year, we tried to allocate resources for the states, in order for them to protect the integrity of the mechanics of the election. The Republicans refused to do that. They absolutely refused to do that, in the House and in the Senate.

RLH: This is with voting machines, with everything?

Pelosi: Voting machines and all of that.

Pelosi: Yes, and they absolutely would not put the resources there. The states need the resources. States run elections. They run at the state level.

Voting machines, social media, who can tell the difference. But it’s the Republicans who refuse to stop the Russians from using social media to ruin elections.

The issue of going beyond that, to the social media, is a much more sophisticated and challenging initiative for us, because you have to always keep ahead of them …… no matter where you are. They’re resilient, and they can get ahead of you, but at least we know this: to be vigilant, to be on the lookout for any strange interventions, which were not really looked into or prevented last time. And so that makes a difference.

What does any of this gibberish mean? They’re out to get us. We have to be vigilant. Watch the skies.

So what did the Russians do?