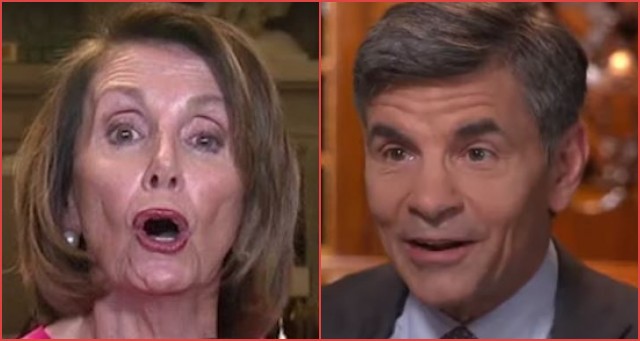 Alright, we all know that the lamestream media will do anything to protect the corrupt Dems by lobbing softball questions, dodging the actual facts and refuse to reports anything negative about any democrat- period.

On the other hand, when it comes to President Trump the same media goes all out to spread hatred and lies over and over and over. For example no coverage of all the Obama scandals but 24 hour coverage on the fake Russian hoax.

So it should not surprise anyone that House Speaker Nancy Pelosi lied like a boss in an interview with ABC News’ former Clinton War Room sycophant George Stephanopoulos, who took a job in media after leaving the second-most corrupt administration in the history of the republic after Obama’s, The National Sentinel reports.

Pelosi actually said live on the air this morning that Shifty Adam Schiff’s entire opening statement earlier this week in which he completely fabricated what President Trump said on a July phone call with Ukrainian President Zelensky wasn’t dishonest.

Wow.
My jaw is on the floor.
“Intelligence” Committee Adam Schiff just fabricated, out of thin-air, the contents of the Trump phone call with Ukraine’s President.
Not a word he says here is true. Not. A. Word.
This entire dark carnival is sad, unhinged Orange Man Bad fan fiction. pic.twitter.com/EzzFDt9BIU

Mind you, not a single freaking word of what Schiff said was true. In fact, it was such BS even he later admitted he made it up — as a “parody.” WTF ever, Schiff.

In any event, again — it doesn’t surprise us that Pelosi lies like a rug or that Schiff is a lying scumbag. They’re Democrats; they can’t help themselves.

But what’s really important to note here is that while Pelosi is claiming that Schiff’s BS wasn’t BS, that little Clinton toady Stephanopoulos didn’t challenge her once.

Never called her out, never reminded her that, hey, you know, Adam refuted his own opening statement, yada, yada. Nothing.

He just let his viewers be propagandized because he and his network are complete garbage.

This is why it’s important to have so-called ‘alternative media’ (like us) in this day and age, especially. The media giants that dominate the news industry have nearly all prostituted themselves out to the Garbage Party. They are liars and hacks and they literally make sh*t up so they can sell the public on fantasies, nonsense, and fake narratives.

You just saw how it works: Democrats get to spew any BS they want and they are unchallenged by the ‘truth seekers.’ It’s puke-worthy.

But then, these are shit people who hate America and hate those of us who support this president and put him in office.

Never forget that we are their ultimate targets — and yes, ‘targets’ is the right word. Let that soak in.