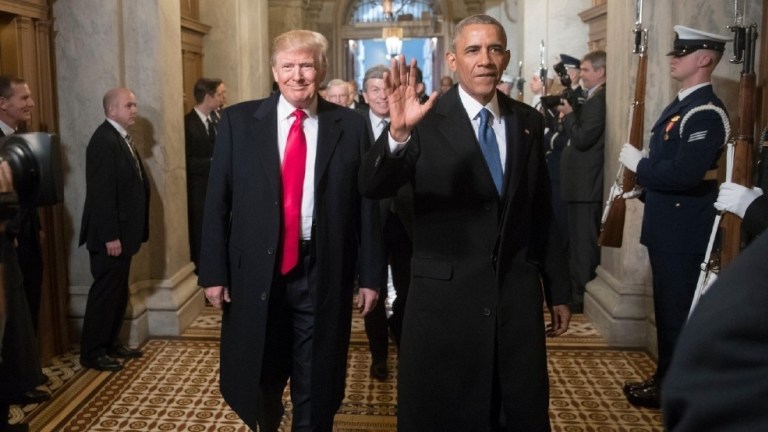 (TNS) The National Archives is in the process of reviewing “thousands” of documents from the Obama Administration, focusing on communications between the White House and Ukraine.

According to Sara A. Carter, the document search appears to be focused on the 2016 time period, when the presidential campaigns were in full swing and it looked as though Donald Trump was running away with the GOP nomination.

She reports that the archives discovered the documents after receiving a request from a pair of Republican senators — Ron Johnson, R-Wisconsin, and Chuck Grassley, R-Iowa — in November.

She adds that the docs “are significant as they directly concern meetings that senior Obama Administration and Ukrainian officials had at the White House in 2016.”

The documents are expected to be reviewed for classification purposes, as well as Executive privilege by lawyers for both President Obama and President Donald Trump, officials told SaraACarter.com.

Johnson, Chairman of the Committee on Homeland Security, and Grassley, Chairman of the Committee on Finance, sent the three page detailed request letter in November to David S. Ferriero, the head of the National Archives. The request was for “records of multiple White House meetings that took place in 2016 between and among Obama Administration officials, Ukrainian government representatives, and Democratic National Committee officials.”

Johnson told Carter, “We will continue our oversight. We are going to get to the bottom of what all has been happening here. Hopefully we will get access to the information to make it available to the American public so they really do understand what’s been happening.”

While National Archives officials could not yet give a timeframe for when the classification review would be complete, a person familiar with the investigation told Carter “our documents request will likely be in the order of several thousand responsive pages. They cannot give us a specific date for when it will completed.”

In November, we reported on Paul Sperry’s “breaking” news that three Senate committees were looking into “Obama-Biden solicitation of Ukrainian” election interference:

One of the Obama administration’s biggest emerging scandals was the way in which the former president and vice president abused Ukraine. That includes the 2016 Clinton campaign and the Democratic National Committee.

We’ve known for nearly three years that Clinton & Co. were mining Ukrainian officials for dirt on then-GOP presidential candidate and nominee Donald Trump because POLITICO told us in January 2017, days before Trump was inaugurated.

Biden, of course, bragged about withholding $1 billion from Ukraine unless that country fired a prosecutor looking into corruption involving an energy company that was employing his son, Hunter, for tens of thousands of dollars per month.

In May 2019, The Hill’s John Solomon reported that Ukrainian embassy officials confirmed the Democratic National Committee “solicited Trump dirt” during the 2016 election cycle:

The boomerang from the Democratic Party’s failed attempt to connect Donald Trump to Russia’s 2016 election meddling is picking up speed, and its flight path crosses right through Moscow’s pesky neighbor, Ukraine. That is where there is growing evidence a foreign power was asked, and in some cases tried, to help Hillary Clinton.

In its most detailed account yet, the Ukrainian Embassy in Washington says a Democratic National Committee (DNC) insider during the 2016 election solicited dirt on Donald Trump’s campaign chairman and even tried to enlist the country’s president to help.

In written answers to questions, Ambassador Valeriy Chaly’s office says DNC contractor Alexandra Chalupa sought information from the Ukrainian government on Paul Manafort’s dealings inside the country in hopes of forcing the issue before Congress.

Chalupa later tried to arrange for Ukrainian President Petro Poroshenko to comment on Manafort’s Russian ties on a U.S. visit during the 2016 campaign, the ambassador said.

Manafort, you will recall, briefly served as Trump’s 2016 campaign manager, which obviously angered the Obama-Clinton-DNC cabal because they were looking for any additional incriminating information they didn’t already have on Manafort. Obama and Biden were aware of Manafort’s Ukraine lobbying operation in 2013 but at that time obviously determined that he had done nothing wrong or illegal because he was never prosecuted. Until Robert Mueller came along.

Carter’s report also coincides with another claim by Sen. Lindsey Graham (R-S.C.) on Monday, who pledged — again — to launch an investigation into the so-called “Ukraine whistleblower,” whom Sperry originally identified as CIA employee Eric Ciaramella.

The operative has ties to Biden and, according to previous reporting, accompanied the former vice president to Ukraine on at least one of his six trips.

“I want to understand how all this crap started,” Graham said on Fox News’s Sunday Morning Futures, who added that the Senate would begin their investigations “within weeks.”

“The Senate Intel Committee under Richard Burr has told us that they will call the whistleblower,” Graham added.

Is this the coordinated counterattack against the deep state that supporters of President Donald Trump have been waiting for? If so, it’s already been months in the planning and execution phase.