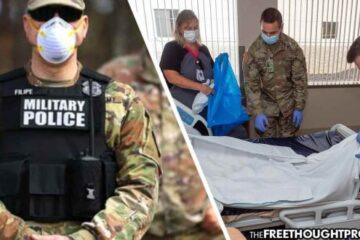 Last month, despite claiming he wouldn’t issue one, President Joe Biden announced a vaccine mandate for all companies in the United States with more than 100 employees. If these companies refuse to comply, they could face massive fines, upwards of $700,000. Not wanting to go out of business from massive fines, companies across the country — under state coercion — have issued an ultimatum to their employees, take the jab or kick rocks.

As many folks don’t want or need a vaccine due to already having COVID-19, or are opposed to it for religious reasons, Biden’s mandate is causing a storm of worker shortages, affecting all industries. Millions of people are quitting or being fired from their jobs over the mandate, adding fuel to the already massive dumpster fire that is the US economy.

As vaccine deadlines loom, so do massive worker shortages — particularly hard hit is the health care industry. After millions of doctors, nurses, and other health care workers braved COVID-19 in 2020, working the frontlines and risking their lives to battle the pandemic, in 2021, they are now considered expendable for not getting a vaccine for a disease they may already have gotten over.

Also facing looming shortages are law enforcement. The Seattle police department, for example, has a deadline in place for October 18 for its officers to be vaccinated. They stand to lose nearly 30% of the entire department that day leading to fears of longer response times and police shortages. They have even devised a plan to put all on-duty personnel, like detectives and training officers out on patrol when the shortage inevitably hits.

The vaccine mandate is creating the perfect storm for complete chaos, especially in the northeast portion of the country who is about to see a massive seasonal spike in COVID cases and hospitalizations.

According to the New York’s official tally, roughly 95,000 hospital and nursing home workers haven’t been fully vaccinated and will be or have been fired or forced out. Imagine the sheer lunacy it takes to force 95,000 health care workers out of their jobs DURING A PANDEMIC.

Yet thanks to the state, here we are in this exact scenario as millions of health care workers across the country are being forced out of their jobs over a vaccination mandate.

In September, New York unveiled their plan to call in the National Guard to cover for the tens of thousands of healthcare workers who are being forced out of their jobs over the vaccine mandate. The state is forcing health care workers out and replacing them with soldiers — nothing at all ominous about that.

Massachusetts concocted a similar scheme to replace the expected worker shortage in the Massachusetts Department of Corrections. Hundreds of officers will be forced out of their jobs on October 17 and the National Guard will be stepping in to replace them.

The irony over the National Guard stepping in to replace any unvaccinated workers is heavy considering the fact that their vaccine deadline isn’t until June of 2022. So, unvaccinated guardsmen could potentially fill a position of a person who was fired — for being unvaccinated.

New York Governor Kathy Hochul claims to have a plan to prevent this from happening, but less than 39% of the National Guard have taken the jab. When pressed about the plan to require troops to be vaccinated to replace the unvaccinated, the governor’s office could not articulate a meaningful response.

We are already seeing the National Guard being sent to hospitals to allegedly help with COVID-19. However, TFTP spoke with a hospital staffing official in Louisiana who said that the military health professionals, at least in their case, weren’t qualified to assist the COVID unit and the entire ordeal ended up being a PR stunt for the press. The military health care workers essentially “got in the way,” according to our source, and were sent to their own floor where they saw patients for things like cuts and broken bones.

Also, the few health care workers who are in the National Guard, according to the spokesman, are likely already employed in the private health care sector — meaning they would be taken away from these jobs, stoking another shortage.

It’s not just in the health care sector either. Any time the guard is deployed, those people are being pulled from their actual jobs, so the state’s plan (if we can even call it a plan) requires robbing Peter to pay Paul. It is utter ridiculousness and entirely avoidable.

Instead of mandating a vaccine and creating a massive worker shortage, the government could have chosen the path of freedom and individual liberty by allowing people to make that choice for themselves instead of being coerced into it. Unfortunately, however, the path of freedom requires reason and logic — both of which the state has none.