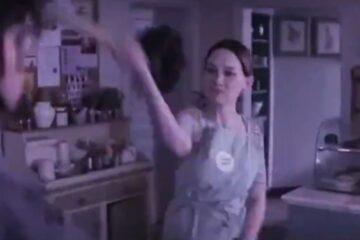 OK, I don’t actually like writing about things I haven’t seen for myself, and when it comes to Netflix, I don’t have a subscription and I have not watched a single episode of their show “You.” However, it’s clear that they are driving a narrative into people’s heads that those who refuse the experimental COVID shots are somehow dangerous to the population, which is the furthest thing from the truth. Those taking the shots are the ones spreading whatever it is that people are getting, and ending up in the hospital, injured or dead themselves. Yet, Netflix is promoting the murder of those who refuse to either take the shot or give it to their children.

Take a look at this brief video clip and commentary concerning what I just mentioned above.

Connor Tomlinson writes at The American Spectator, and I use his commentary as he is one who has viewed the series.

Likewise, You has always attempted to make its serial-killing stalker a socially liberal ally. Joe’s close friends and dating pool are disproportionately “diverse”: non-white, disabled, and LGBT. His internal monologues are peppered with scorn for Trump voters and anti-feminists. But the primary tactic employed by writers to make viewers compromise their moral unease with vigilantism was to make Joe’s victims all awful people. Cheaters, wife beaters, murderers, mob enforcers, stalkers, pedophiles. Quite the rogues’ gallery concocted to tempt a viewers’ appetite for vengeance.

This track record primes us for when, in season 3, suburbanite father Gil gets Joe and Love’s new son ill because his children aren’t vaccinated against meningitis. (A move very out of character, given Gil hosts a science-themed birthday party for his kids an episode prior.) To add insult to injury: Gil’s bludgeoning with a rolling pin is a blow softened when we learn he covered for his son’s repeated sexual assaults, and that he embezzled church funds during an extramarital affair. But these later sins are revealed after he has already been beaten and imprisoned for his anti-vaccine views.

Gil’s confessions break the creative writing 101 convention of “Show, don’t tell.” Having characters monologue their topically relevant backstories shows that the scriptwriters are more committed to bolstering an extra-textual narrative than telling an authentic story. Joe & Love’s anti-“anti-vaxxer” soliloquies likewise bear the hallmarks of the writers’ ideological possession. But the biting irony is that having serial killers side with your political convictions isn’t the ringing endorsement you think it is. The protagonists of You are horrible people, no matter how attractive and intelligent they are. Nobody should take lectures on social responsibility from characters who moonlight as murderers.

As a man who’s had his MMR jabs, I was very uncomfortable watching the disturbing trend of world leaders’ anti-unvaccinated rhetoric translated into glorified violence in popular culture. President Biden and the Australian premier have blamed breakthrough cases on “a pandemic of the unvaccinated.” Scotland, Wales, Italy, and France have introduced vaccine passports to access nightclubs, bars, and restaurants. Citizens of Canada, Queensland, and New York, as well as U.S. federal employees are threatened with unemployment due to vaccine mandates. The worldwide trend of authoritarian action in pursuit of an impossible zero-COVID utopia is instituting medical apartheid, at great profit to manufacturers with a history of unethical testing practices.

The logic of the married murders is that Gil deserves to die because he “put [their] son at risk.” With the show making mention of lockdowns, this appeal to collective responsibility goes for more than just the MMR vaccines. You breaks the fourth wall to accuse its unvaccinated viewers of being walking bioweapons, despite the infinitesimal statistical risk COVID poses to healthy children. In fact, side-effects like heart palpitations from Pfizer and Moderna have caused pauses in usage in Sweden, Finland, Denmark, and Iceland. When You’s writers conflate concerns about COVID vaccines with skepticism of the safety of long-term-tested MMRs and the endangerment of children, they overplay their disingenuous hand.

The fact of the matter is that Netflix has been promoting many things that are simply unlawful. Remember when they were promoting children as sex objects in their “Cuties” program?

The inertia of our news cycle induces a collective amnesia. The headlines of today make us forget what outraged us yesterday. We’re so desensitized to tragedy and nonsensical wokery that our attention spans have worn thin. That’s how the cognitive dissonance concerning Netflix persists, how it can be applauded for defending Chapelle while Cuties still exists for every pedophile’s degenerate pleasure. But Netflix shouldn’t be allowed to let its endorsement of violence against the unvaccinated slide, no matter how addicted you are to Squid Game.

As long as Netflix populates its content with identity politics and endorsements of violence against your fellow Americans, they don’t deserve your subscription. Stop paying the wages of those who hate you, while fellow citizens lose their livelihoods to medical tyranny.

I usually don’t have an issue with stories that have sinful acts in them, as even the Bible contains such things, but the Bible does not allow men to escape their sins, but rather brings judgment upon them.

What is Netflix doing? They are promoting that you can murder someone in cold blood because you believe they are a threat when they really aren’t and you can get away with it.

For those thinking along the lines of what Netflix is promoting, just remember that a vast majority of those wise enough not to be part of an experiment that violates the law are armed.

How far we have fallen that this is tolerated. It’s not free speech. It’s promoting criminal activity.